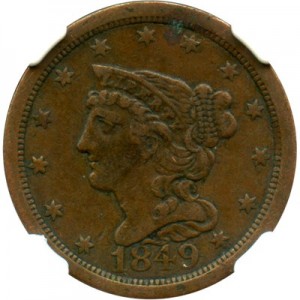 Large cents have now come to be known as pennies, but when they were first produced this name was as foreign as the coin itself. As one of the first styles of coin produced by the US Mint, the Large Cent was determined by Congress to have a face value of 1/100th of a Dollar. Unlike today’s pennies, these large single-cent coins were closer in size to a modern half-dollar.

Though these coins were first put into production during the early 1790s, they continued rolling off the presses until the middle of the 19th century. This means that every year from 1793 to 1857 (with the exception of 1815) the Large Cent was one of the most heavily produced coins by the US Mint.

The War of 1812 played a major role in the absence of a Large Cent edition from 1815, as a wartime embargo prevented blank copper planchets from being shipped to the US. Though the Mint worked with the supply of planchets it already had on-hand, they had run completely out by the time it came to produce the 1815 edition. Fortunately, the war with Great Britain was put to a halt in 1816, at which point the US Mint immediately ordered more copper blanks to be used to create Large Cents. Another interesting aspect of the Large Cent is that they were only produced by the Philadelphia Mint.

As far as the coin’s design is concerned, the Large Cent always kept things simple. With that said, however, the design of this single-cent coin changed many times throughout its long time in production. The initial design(s), which can be found on Large Cents minted in 1793, was very simplistic in its design. The obverse side of the coin depicted a right-facing Lady Liberty with hair that seemed to be windblown. The coin’s reverse, however, was the subject of much controversy as it depicted a ring of chains which many believed to be designer Henry Voigt alluding to his support of slavery.

Though the first design was not warmly welcomed, it is of particular importance to numismatists because it was the first coinage produced by the US Mint by way of the Mint’s own equipment and processes. Only little more than 30,000 were minted.

Before moving to a new 1794 edition, the US Mint gave in to public opinion and altered the design of both the coin’s reverse and obverse sides. The coin’s new reverse depicted an ornate wreath, which was much more accepted than the ring of chains. Though still rare, the Wreath reverse Large Cent had a mintage of more than 60,000.

Despite Adam Eckfeldt’s redesign of the 1793 Large Cent, Mint Director David Rittenhouse hired Joseph Wright to completely revamp the coin’s design for the 1794 release. Wright’s design also depicted Lady Liberty on the obverse of the coin, but made her hair neater and added a Phrygian cap, a historic symbol of freedom. The coin’s reverse maintained a design which boasted a wreath, but the wreath on the 1794 edition was made to identically resemble a laurel wreath. More readily accepted by the general public, the design unveiled in 1794 continued in production for three years before being replaced by the Draped Bust design.

In 1796, a man by the name of Robert Scot completely redesigned the United States coinage, including the Large Cent. The new obverse depicted a right-facing Lady Liberty, but she was more ornate-looking, with a ribbon in her hair and drapery near her bust. As opposed to the Laurel wreath design conceived a few years prior, the 1796 edition featured an olive wreath. This design seemed to be even more accepted than those previous to it as it was maintained up until 1808.

In 1808, Robert Scot’s assistant engraver John Reich was appointed as the person who was going to redesign Scot’s Draped Bust design. The new style of Large Cent has come to be known as the Classic Head design as it now featured a left-facing Lady Liberty with ornate headgear reminiscent of a crown. This headgear, known as a fillet, was said to resemble very closely the headgear given to storied male athletes in Ancient Greece. The copper utilized to make these coins was of a higher quality than ever used before, and because of this the coins were softer and more prone to showing signs of wear and tear.

Again, in 1816, Chief Engraver Scot was forced to redesign the coin once more. This time, the image of Lady Liberty was made to make her look more mature, which is why this design has become known as the Matron Head design. In some numismatic circles, this particular Large Cent design is known as a Coronet Cent. These coins were minted up until 1839, when the design was forced to change yet again.

In 1835, the new Chief Engraver of the US Mint was Christian Gobrecht, and he was tasked with redesigning the Large Cent for the last time. Gobrecht reverse-aged Lady Liberty to give her a younger look, and her hair was put into a braid. This was the last design change the Large Cent went through, and this design was minted up until the late 1850s.

As you can clearly see, there are quite a few different possibilities when it comes to collecting the Large Cent. Being that the coin was in production for nearly 100 years, it would follow that many have survived to today, but such is not the case. Especially when it comes to the oldest minted versions, these coins are quite difficult to find, and even harder to find in pristine condition.

The Large Cent is arguably the most popular type of US Coin for collectors to get their hands on. Being that these were some of the first coins to have ever been the official coinage of the United States, each and every piece is a piece of US history.

For collectors, even Large Cents in awful condition are a prize. Many of these coins are 200 years old or more, so it is not really expected that they will be in great shape. For this reason, it is easy to understand why collectors are willing to pay so much for a Large Cent that is in above average condition.