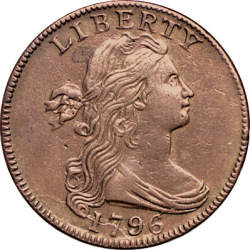 If we are talking about coins produced before the turn of the 19th century, there are few more popular than the Large Cent. Having first been produced in 1793, the Large Cent is an iconic piece of US coinage that laid the groundwork for many coins that eventually followed it. Thanks to it having been minted over 200 years ago, it goes without saying that there are very few 1796 Large Cents remaining, making now as good a time as ever to get your hands on one. There were 2 different types of Large Cent produced in 1796–the Liberty Cap and the Draped Bust.

On the obverse side of the Liberty Cap, the hallmark feature is the raised image of a rightward facing Lady Liberty. As opposed to previous years, where her hair was uncovered and free-flowing, the 1796 edition of the coin features a cap that is partially covering Lady Liberty’s hair. Above the image is an inscription that reads “Liberty,” while the 1796 year of minting is listed towards the bottom. All along the outer edges of the reverse and obverse sides of the coin are 100 individual dots.

On the obverse side of the Draped Bust, the central part of the face is dominated by the raised image of a Lady Liberty bust. Per the coin’s name, there is a drape partially covering the lower portion of the bust. Above the central imagery is a raised inscription which reads “Liberty,” while the 1797 year of minting can be found towards the bottom. On both the obverse and reverse sides of the coin, the outer edges are marked by 100 individual, raised dots which give the coin more texture.

On the reverse side of both versions of the 1796 Large Cents, the center of the face is dominated by an inscription which reads “One Cent.” Directly around the central face value indication is a loose wreath that is held together by a bow. Surrounding both of these is another inscription which reads “United States of America.” Finally, towards the bottom of the coin you will notice a “1/100” inscription. This marks the coin’s value relative to a whole dollar.

When it comes to collectors and their affinity for the 1796 Large Cent, that affinity comes with certain requirements. First and foremost, most every collector mandates that these coins be graded by a professional grading service. Thanks to so many counterfeits existing nowadays, collectors need to ensure that the coin they are about to buy is authentic. Below is an outline of the different coin grades as well as what they mean for the appearance of a 1796 Liberty Cap Large Cent.

Uncirculated: Though there are very few available, an Uncirculated 1796 Large Cent is one that spent no time on the open market. These coins were kept in a safe place from the day they were minted and have retained all of their features. These, as you might expect, are the most sought after pieces.

Extremely Fine: A 1796 Large Cent that is determined to be of Extremely Fine grade is one that was likely never circulated, but is not in absolutely perfect condition. Though there are no signs of standard wear and tear, you will notice a few signs of other damage. Still, the condition these coins are in is excellent considering they are well over 200 years old.

Fine: A coin determined to be of Fine grade is one that was circulated for a period of time, but not too heavily damaged. You will notice some light scratching and smoothing on both sides of the coin, consistent with pieces that have exchanged hands a number of times.

Good: 1796 Large Cents of Good grade are the worst coins you will find. These pieces will show a lot damaged, so much so that some of the raised aspects of the coin will have been smoothed down thanks to the exchanging of hands.

For coins as old as the 1797 Large Cent, the biggest concern on the part of collectors is the condition it is in. All of these pieces are valuable, but their value increases dramatically as its condition improves. Below is a chart aimed at giving you a better idea as to what you might pay for a 1797 Large Cent given its grade and type.