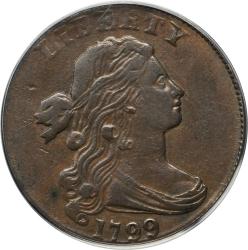 The 1799 Draped Bust Large Cent was produced so long ago that few people believe there are any still around. Despite this, you might be surprised to know that there are quite a few of these old coins still up for sale. As part of some of the earliest US coinage, it should come as no surprise that collectors desire these coins due to their age as well as their historical significance.

On the obverse side of the 1799 Draped Bust, you will see the raised image of Lady Liberty dominating the center of the face. Above the image of Lady Liberty is an inscription which reads “Liberty,” while the 1799 year of minting is positioned towards the bottom. Around the outer edges of both the obverse and reverse sides of the coin, you will find 100 individual, raised dots which give the coin some added texture.

On the reverse side of the 1799 Large Cent, you will see the “One Cent” face value inscription in the center. Surrounding this indication is a wreath that is loosely tied together with a bow. Surrounding both the face value and the wreath is an inscription which reads “United States of America.” Finally, towards the bottom and in the center, there is a “1/100” inscription, marking the coin’s value relative to a whole dollar.

For collectors, the only type of Large Cent that is worth collecting are those that have been graded. Because there are so many counterfeits circulating the markets nowadays, collectors want to be absolutely certain that the coin they are buying is guaranteed to be authentic. Below, we will outline the different coin grades as well as what those grades mean for the appearance of the 1799 Draped Bust Large Cent.

Uncirculated: A 1799 Draped Bust Large Cent that is determined to be of Uncirculated grade is one that has been kept in safekeeping from the moment it was minted. Though there are very few of these coins around, their appearance is pristine and they look the same as they did the day they were minted.

Extremely Fine: If a Large Cent is determined to be of Extremely Fine grade, this means that the coin was probably never circulated, but still has a few signs of damage. Though this damage might be small and barely noticeable, it is still there and taken into account.

Fine: Fine is the grade given to Large Cents that have been circulated and worn, but not so much so that their surface imagery and lettering will have been compromised. Though you will definitely notice some smoothing and light scratching, the coin will still be in decent shape.

Good: Good is the grade given to Large Cents that have been heavily circulated and show plenty of signs of their time in circulation. These coins will be heavily worn, so much so that some of the raised surface imagery and lettering will have been compromised.

In order to determine a price for the 1799 Draped Bust Large Cent, the only thing you really need to take into account is the condition the coin is in. Though most coins this old are expected to be in rough shape, their value improves dramatically as their condition does. Below is a chart aimed at giving you a better idea of what a 1799 Draped Bust Large Cent might cost given its grade.