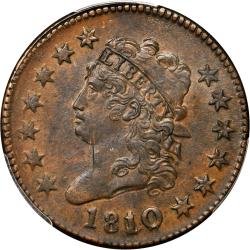 On the obverse side of the 1810 Classic Head Large Cent, the central part of the coin is dominated by the leftward-facing Lady Liberty. In previous years, she was facing the opposite direction. Inscribed within a band on Lady Liberty’s head is the word “Liberty.” On both the left and right sides of Lady Liberty exists a total of 13 stars. These exist to commemorate the 13 original colonies of the United States. Finally, the 1810 year of minting can be found towards the bottom of the obverse.

For collectors, there are very few circumstances where they will settle for coins that have not been officially graded. Because there are so many counterfeits circulating nowadays, it is absolutely imperative that coins be graded. Below exists an outline of the different coin grades as well as what those grades mean for the appearance of the 1810 Classic Head Large Cent.

Uncirculated: A Classic Head that is determined to be of Uncirculated grade is one that, quite literally, was never circulated. From the day this coin was first minted, it was kept in a safe place and avoided any and all damage. As such, it is in pristine condition.

Extremely Fine: Extremely Fine is a grade indicative of a Classic Head Large Cent that might show small signs of damage, but damage that is hardly noticeable. Apart from a scratch or two, these coins will be in mostly pristine condition seeing as they were likely never circulated.

Fine: Fine is the grade given to coins that were circulated, but only for a short period of time. These pieces will show consistent, light scratching on both the obverse and reverse sides, but all of the raised imagery and lettering will still be intact.

Good: Good is the grade given to those 1810 Classic Head Large Cents that have been circulated heavily. These coins will show a lot of damage. So much so that some of the raised imagery and lettering might have been completely and entirely smoothed away.