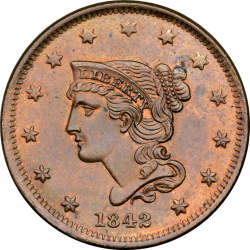 The 1842 Liberty Head Large Cent is a coin that attracts collectors not only in the United States, but from around the world as well. Being that the coin was produced such a long time ago, it goes without saying that there are only a limited number of them remaining. Understanding this, there really has never been a better time for you to get your hands on one.

The obverse of the 1842 Liberty Head features the image of Lady Liberty in the center. The leftward-facing image is depicted with a band on her head, and within the band is inscribed the word “Liberty.” Beneath the central image of Lady Liberty is another inscription which marks the 1842 year of minting. Finally, the outer edges of the obverse feature 13 stars, each one representing one of the 13 original colonies of the United States.

On the reverse side of the coin, the center is marked by the “One Cent” face value inscription. Surrounding this is an ornate wreath which features a lot of detail. Around the outside of this is one final inscription, this one reading “United States of America.” Finally, the very outer edges of both sides of the coin are marked with raised rays, which give the coin some additional texture.

In this day in age, the unfortunate reality is that old coins such as the 1842 Liberty Head are counterfeited frequently. In order to protect themselves from this, collectors nowadays will only seek out coins that have been graded and certified as being authentic. Below, we will outline the different coin grades as well as what they mean for the appearance of the 1842 Liberty Head.

Uncirculated: A Liberty Head that is determined to be of Uncirculated grade is one that, quite literally, never made it out onto the open market. Having never been exchanged, these coins will look today exactly like they did when they were first minted.

Extremely Fine: A coin that is graded as being Extremely Fine is one that will be mostly pristine save for a few small, minor imperfections. Apart from a few small scratches, these coins will also appear to be in excellent condition. In some cases, the imperfections are not even readily identifiable with the naked eye.

Fine: If an 1842 Liberty Head Large Cent is determined to be of Fine grade, this means that the coin was circulated for some time, but taken out before too much damage could occur. These coins will feature a lot of light scratching and chipping, but not so much that the raised imagery and lettering will have been compromised.

Good: Good is the lowest grade a coin can receive, and usually is a grade given to some of the most worn and damaged coins around. These pieces will have had their surface imagery and lettering worn down to such a degree that some of it may no longer be able to be made out with the naked eye.

In order to determine the price you might be asked to pay for the 1842 Liberty Head Large Cent, the first thing you must look at is the condition the coin is in. Naturally, the more well-preserved coins will carry a higher price tag than those that have been damaged. In addition, you must also look at how many coins are for sale at a given point in time. The fewer coins there are, the more expensive individual coins are going to be. Below, you will find a chart aimed at giving you a better idea of what a graded 1842 Liberty Head might cost.