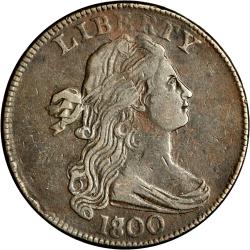 The 1800 Draped Bust Large Cent is an especially valuable and historical piece of US coinage. Though these coins were produced more than 200 years ago, the fact of the matter is that they are still able to be purchased. With that being said, the number of Large Cents from 1800 remaining is dwindling, so there has never been a better time than now to get your hands on one.

On the coin’s obverse, the central aspect of the face features the rightward facing profile of Lady Liberty. Above Lady Liberty’s image is an inscription which reads “Liberty,” while the 1800 year of minting is indicated towards the bottom of the coin. On the outer edges of both the reverse and obverse sides, there are 100 individual, raised dots.

If we are talking about collectors, not just any 1800 Large Cent will do. Instead, collectors will only settle for those coins that have been graded and certified as being authentic. Being that there are so many counterfeits nowadays, collectors are wary about coins that have not been certified. Below is an outline of the different coin grades as well as what those grades mean for the appearance of the 1800 Draped Bust Large Cent.

Extremely Fine: Extremely Fine is the grade given to 1800 Draped Bust Large Cents that were probably never circulated, but do feature some signs of damage. Though this damage is usually as small as a single chip or a few scratches, it is still noticed during the grading process.

Fine: Draped Bust Large Cents that have been determined to be of Fine grade are those that were circulated, but have managed to avoid a lot of damage. You will notice some consistent, light scratching thanks to years of circulation, but apart from that the piece will be in pretty well-preserved condition.

Good: Good is the grade a Large Cent would receive if it is one that has been extremely heavily circulated. As a result of this heavy circulation, these coins will play host to a good bit of damage. In fact, some of the raised surface features of the coin might have been worn away completely over the years.

In order to determine a price for the 1800 Draped Bust Large Cent, you really don’t have to look much further than its condition. Being that most people expect these coins to be in rough shape, the value of them dramatically increases if it has been well-preserved. Below is a chart aimed at giving you a better idea as to what the value of an 1800 Large Cent might be given its grade.