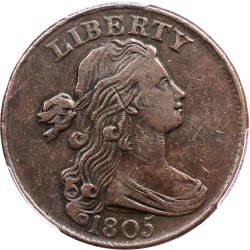 The 1805 Draped Bust Large Cent is one of the many, many extremely valuable old coins. It isn’t just because the coin is old that makes it a collector’s item. Rather, the coin is sought after due to it being a piece of US history as well as extremely rare. With the number of these coins remaining decreasing all the time, there has never been a better time to get your hands on one.

On the coin’s obverse, the central part of the face is dominated by the rightward-facing bust of Lady Liberty. Towards the bottom of the image, there is what appears to be a drape covering the bust; this is how the coin got its name. Above the image is an inscription which reads “Liberty,” while the 1805 year of minting is listed towards the bottom. Along the outer edges of both the obverse and reverse aspects of the coin are 100 dots, which give the coin a bit of added texture.

On the reverse side of the Large Cent, there is an inscription which reads “One Cent.” Partially surrounding the central inscription is the image of a wreath, bound together by a bow. Surrounding all of this is yet another inscription, this one reading “United States of America.” Finally, there is a “1/100” inscription beneath the bow.

For collectors, there is absolutely no way anyone will be interested in coins that have not been graded. The fact of the matter is that there are a number of counterfeit coins in circulation nowadays, so collectors will want to be assured that the coin in their collection is certified as being authentic. The outline below will touch on the different coin grades as well as what those grades mean for the appearance of the 1805 Draped Bust Large Cent.

Uncirculated: A coin that is determined to be of Uncirculated grade is one that, from the day it was minted, never spent any time in circulation. As a result, these pieces will have absolutely no signs of wear and tear.

Extremely Fine: If an 1805 Draped Bust is graded as being Extremely Fine, this means that it might show a few signs of damage, but was still probably never circulated. All in all, these coins will appear to be in pristine condition even despite their 200+ year age.

Fine: Draped Busts that have been graded as being Fine are those that have been circulated to some extent, but were taken out of circulation before they were able to incur too much damage. Though you will notice some light scratching and smoothing, these coins will be in great shape.

Good: Good is the lowest grade a coin can receive, and is one that is indicative of a piece that has been heavily damaged. The faces of these coins will have been worn and smoothed due to years of exchanging hands, but they are still sought after by collectors.

When it comes to assigning a price to the Large Cent, you really do not have to look much further than the coin’s condition. Because these coins are so old, even some of the most damaged pieces are quite expensive. Understanding this, it goes without saying that well-preserved pieces often break the bank. The chart below is aimed at giving you a better idea of what these coins might cost, given their grade.