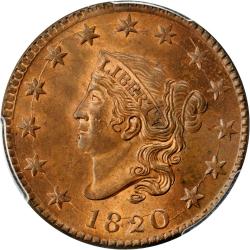 The 1820 Liberty Head Large Cent is an extremely sought after coin mostly because it is one of the earliest editions of a brand new coin design. Though the Large Cent was produced for many years, the Liberty Head variety is, by far, one of the most collectible. All the time, the number of these coins available is decreasing, making now a great time to purchase one of these coins.

On the obverse side of the Liberty Head, the central part of the coin is dominated by the image of Lady Liberty. Lady Liberty is facing leftward, as opposed to previous editions where she was facing the opposite direction. The image is said to be a more mature depiction of Lady Liberty than had previously existed. On a band across Lady Liberty’s head, you will see the word “Liberty” inscribed. Below the central image is an inscription marking the 1820 year of minting. Finally, the outer edges of the obverse are marked by 13 stars, for the 13 original colonies of the United States.

The reverse side of the coin is a good deal simpler than the obverse. In the center is an inscription marking the “One Cent” face value. Surrounding that is an ornate, beautiful wreath. Finally, the phrase “United States of America” is inscribed around the outer edge of the reverse.

For collectors, the Large Cent is a coin that will not be purchased unless it has been graded. These coins are counterfeited so often that collectors only want pieces that have been certified as being authentic. As such, we have outlined the different coin grades below.

Uncirculated: A coin that is determined to be of Uncirculated grade is one that never spent any time exchanging hands on the open market. These pieces will be free from flaw and will look today exactly like they did when they were first minted in 1820.

Extremely Fine: A coin determined to be of Extremely Fine grade is one that might not have been circulated, but will show a few signs of damage. These coins will feature a few minor flaws like a scratch or two, but will be mostly well-preserved.

Good: Good is the grade given to coins that have been extremely heavily circulated and damaged. Though some of the surface imagery and inscriptions might have been compromised, these coins are still sought after by collectors.