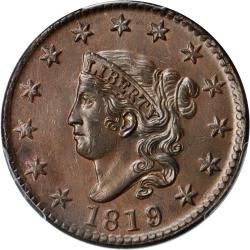 The 1819 Liberty Head Large Cent is one of the most iconic pieces of coinage to ever be produced by the US Mint. Though the design of the coin is similar to previous years, its slight differences make the coin extremely attractive in the eyes of collectors. Being that there are only a limited number of these coins still around, now is a great time to get your hands on one.

On the obverse side of the 1819 Liberty Head Large Cent, you will notice the depiction of Lady Liberty in the center. As opposed to previous designs, Liberty is said to be more regal and mature. On a band which she is wearing on her head, the word “Liberty” is inscribed. Beneath Lady Liberty is an inscription which marks the 1819 year of minting. Finally, surrounding the central image are 13 stars, representative of the 13 original colonies of the United States.

On the coin’s reverse, you will notice that the “One Cent” face value of the Large Cent is situated in the middle. An ornate, circular wreath appears to be surrounding the central face value inscription, while the words “United States of America” comprise a majority of the coin’s outer edge. It should also be mentioned that the very outer edges of both the obverse and reverse sides of the coin feature raised rays, which give the coin a bit of added texture.

With regard to the Liberty Head Large Cent, collectors are always especially wary. The reason for this is due to the fact that these coins are often counterfeited. Understanding this, collectors only seek out those coins that have been graded and certified as being authentic. Below is an outline of the different coin grades as well as what those grades mean for the appearance of the 1819 Liberty Head Large Cent.

Uncirculated: If a coin is determined to be of Uncirculated grade, this means that is never made it out onto the open market. As such, these coins will look today just like they did back in 1819 when they were first minted.

Extremely Fine: If a coin is determined to be of Extremely Fine grade, this means that the coin was probably never circulated. Despite this, there will be a few small signs of damage. Whether it be a few scratches or chips, the coin will have some small sign of wear.

Fine: Fine is the grade given to coins that have been lightly circulated and lightly worn. These pieces will show light, consistent scratching on both sides, and will have been worn down to some extent thanks to the changing of hands over the years. Still, they will be in pretty decent shape.

Good: Good is the grade given to the Large Cents that have been circulated more than any other. These coins will have a lot of damage thanks to decades of exchanging hands. The damage on these pieces is so significant that some of the raised imagery will have been worn down.

In terms of assigning a price to the 1819 Liberty Head Large Cent, this is something that depends on both the rarity of the coin as well as its condition. Naturally, the fewer there are for sale the more expensive those coins are going to be. In addition to this, as the condition of the coin improves, the price will undoubtedly increase. The chart below will serve the purpose of giving you a better idea as to what you might be asked to pay for an 1819 Liberty Head Large Cent given its grade.