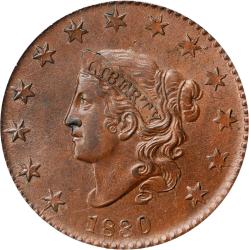 The 1830 Liberty Head Large Cent may be just one of many Large Cents minted throughout the years, however it is highly collectible. This coin, though old, is timeless in the eyes of collectors. Whether you are just starting a new collection, or looking to add to a preexistent one, the 1830 Liberty Head is the perfect piece for you. With that being said, there are only a limited number available, so now is a great time to get your hands on one.

On the obverse side of the 1830 Liberty Head, the center of the face is marked by the image of Lady Liberty. Inscribed upon a band resting on her head is the word “Liberty,” while the 1830 year of minting is inscribed below the central image. Surrounding the central imagery are 13 stars, representative of the 13 original colonies of the United States.

On the coin’s reverse, you will notice that the “One Cent” face value is inscribed in the center. Surrounding this central inscription is a highly detailed wreath. On the outside of this, there is one last inscription, this one reading “United States of America.” On both the obverse and reverse sides of the 1830 Liberty Head Large Cent, you will find raised rays decorating the very outer edges. These rays give the coin a bit of added texture.

For collectors, the simple fact of the matter is that the 1830 Liberty Head is a coin that is frequently counterfeited. As a result of this unfortunate, yet all too familiar phenomenon, collectors will not settle for just any coin. Instead, they will only purchase those that have been graded and certified as being authentic. Below, we have outlined the different coin grades as well as what those grades mean for the appearance of the 1830 Liberty Head.

Uncirculated: A coin that is determined to be of Uncirculated grade is one that never spent any time in circulation. As a result, these coins will look today just as they did when they left the US Mint back in 1830. Which is to say that these pieces will be in excellent condition.

Extremely Fine: A coin determined to be of Extremely Fine grade is one that was probably never circulated, but is not free from damage. The damage on the faces of these coins will be very minor, but is still taken into consideration during the grading process.

Fine: Fine is the grade given to coins that have been circulated for extended periods of time, yet are not so heavily damaged. There will be consistent light scratching and smoothing on the surfaces, but neither will be so severe that the surface imagery nor lettering will have been worn away.

Good: Good is the grade given to the absolutely most heavily circulated Liberty Heads available. These pieces will show ample signs of damage, from deep scratching to the complete wearing away of surface imagery and lettering. Still, these coins are highly collectible.

When it comes to assigning a price to the 1830 Liberty Head Large Cent, this is something that can be done by looking at the coin’s condition as well as its scarcity. Because there is not an infinite amount of coins on the market, collectors will need to be wary of how many are available for sale at any point in time. If there are only a handful on the market, the price per coin will be higher than if there were hundreds of thousands. Beyond that, condition means everything. As the condition improves, so too will the price. Below, we have a chart which lists the 1830 Liberty Head’s asking price, given its grade.