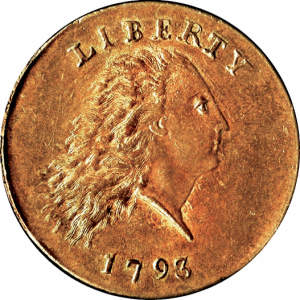 Of all US coins ever produced, the 1793 Flowing Hair Large Cent is up there with the rarest. This particular coin was not only produced for one single year, it was the first coin produced by the US Mint using its own equipment and facilities. For this reason, there are a limited number of these coins available and that number is decreasing all the time. As such, there has never been a better time to get your hands on one.

Something interesting to note about this coin is that it was only produced for one year primarily due to its design being seen as highly controversial. As for that design, the obverse side of the coin boasts the image of Lady Liberty. The coin is called the “Flowing Hair” Large Cent because Lady Liberty is depicted with long, flowing hair. Arching overtop of Lady Liberty’s image is the word “Liberty,” while the 1793 year of minting is featured underneath.

On the reverse side of the 1793 Large Cent, the central part of the coin boasts the “One Cent” face value. Surrounding the face value is a series of chains, meant to be reverse chains. This particular aspect of the coin is what drew so much ire from the public, as it was seen as supporting slavery. Around the outside of the coin is a raised inscription which reads “United States of America.”

For collectors, you will notice that there is absolutely no interest in coins that have not been graded. As such, the only 1793 coins that are around are those that have been professionally graded. Below we will outline the different coin grades as well as what those grades means for the appearance of the 1793 Large Cent.

Uncirculated: If a 1793 Large Cent is graded as being Uncirculated—and very few of them are—this means that the coin is in absolutely flawless condition. From the time it was minted to today, the coin will have been perfectly preserved, and its condition will show that.

Extremely Fine: If a coin is determined to be of Extremely Fine grade, this means that it was likely never circulated, but will have some signs of damage. Yet again, these type of 1793 Large Cents are extremely difficult to find, but if you do manage to find one you will notice that they are in nearly flawless condition.

Fine: A 1793 Large Cent that is determined to be of Fine grade is one that has been circulated, but not very heavily. These coins will show signs of consistent scratching and chipping due to years of exchanging hands, but all of the imagery and lettering will still be discernable with the naked eye.

Good: Good is the worst grade a 1793 Large Cent can receive, but is also the one you will find the most. These coins will show their age and will feature a significant bit of smoothing and chipping thanks to it having been circulated for an extended period of time. Nonetheless, these coins are still highly sought after.

When it comes to the 1793 Flowing Hair Large Cent, the price you will pay is determined, almost solely, by its condition. As the condition of these coins improves, even slightly, the price will increase dramatically. Below, you will find a chart aimed at giving you a better idea as to what you might be asked to pay for a 1793 Large Cent.