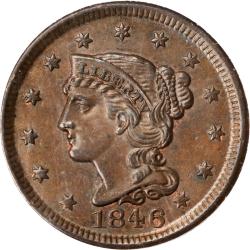 The 1846 Liberty Head Large Cent is a coin that has been around for well over 100 years, but despite its age the coin can be found with relative ease. Collectors the world over have flocked to the Liberty Head for years, and that is something that does not look to be changing in any great hurry. With that being said, the number available for purchase is always decreasing, meaning there has never been a better time than now to get your hands on one.

On the coin’s obverse, the center of the face is marked by the detailed image of Lady Liberty, who is facing leftward. Inscribed within a band that is resting on Lady Liberty’s head is the word “Liberty,” while the coin’s 1846 year of minting is inscribed towards the bottom of the coin. Finally, around the outer edges of the coin there are 13 stars, representing the 13 original colonies of the United States.

On the reverse side of the Liberty Head, the center of the face features an inscription marking the “One Cent” face value. Surrounding the central face value inscription is the image of a wreath, which is depicted in stunning detail. Finally, around the outside of the wreath there is another inscription reading “United States of America.”

For collectors, the fact that coins like the 1846 Liberty Head are counterfeited as frequently as they are means that a good amount of caution must be exercised before purchasing. In order to protect themselves against counterfeits, collectors will only want to purchase those coins that have been graded and certified as being authentic. Below, you will find a chart that will give you a better idea of what the different coin grades mean for the appearance of a Liberty Head.

Uncirculated: A coin determined to be of Uncirculated grade is one that never spent any time on the open market. These pieces will have been perfectly preserved such that the imagery and lettering on the coin will look today exactly like it did back in 1846.

Extremely Fine: A coin determined to be of Extremely Fine grade might not have been circulated, but will play host to some element of damage. Even if it is only one single scratch, these coins will be damaged to some minor degree. Still, they are in great shape overall.

Good: Good is the worst grade a coin can receive, and is indicative of a piece that has been both heavily circulated and damaged. These pieces will have had their surface imagery and lettering severely worn, so much so that some of it may have been worn away entirely.

In order to determine the price you might be asked to pay for an 1846 Liberty Head Large Cent, you really do not have to look much further than the condition it is in and the grade it has received. A general rule of thumb will tell you that as the condition and grade improves/increases, so too will the price. Another factor that will come into play is the total number of coins available for sale at a given point in time, but the price will mostly depend upon the coin’s condition. Below, you will find a chart aimed at giving you a better idea of what you might be asked to pay for a graded 1846 Large Cent.