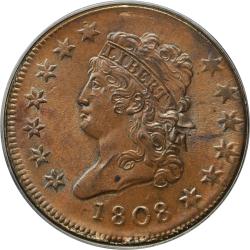 The 1808 Classic Head Large Cent is one of those coins that collectors go absolutely bonkers over. Not only does it feature a unique design, the coin itself is extremely old and becoming increasingly difficult to find. With so few remaining, there has never been a better time than now for you to get your hands on one.

On the obverse side of the Classic Head Large Cent, the center features the raised image of Lady Liberty facing leftward. Lady Liberty looks similar to how she did in previous Large Cent depictions, however the “Liberty” inscription is on a band covering her hair rather than above her image. To the left and the right of Lady Liberty are 13 stars, representative of the first 13 colonies of the United States. On the bottom of this side of the coin is the 1808 year of minting indication.

On the coin’s reverse, the central part of the face features a “One Cent” face value inscription. Surrounding the central face value inscription is an ornate, circular wreath. This differs from previous years, which featured a fractured wreath which was bound together by a bow. Finally, the phrase “United States of America” is inscribed surrounding everything on the reverse face.

For collectors, coins as old as the 1808 Large Cent are the source of great skepticism because so many of them have been counterfeited. As such, you will see that collectors only settle for those pieces that have been graded. Below is an outline of the different coin grades as well as what they mean for the condition of the Large Cent.

Uncirculated: A coin that is determined to be of Uncirculated grade is one that never spent any time exchanging hands on the open market. As a result of this, these pieces will look today exactly as they did the day they were minted.

Extremely Fine: a Large Cent that has been determined to be of Extremely Fine grade is one that might have never been circulated, but has also managed to avoid most damage. Apart from a minor imperfection or two, these coins will be in absolutely pristine condition.

Fine: Fine is the grade given to 1808 Classic Head Large Cents that have been circulated, but have mostly managed to avoid damage. You will see light scratching and some smoothing on the coin’s surfaces, but other than that these pieces will be decent shape.

Good: Good is the grade given to coins that have been both heavily circulated and heavily damaged. In many cases, the damage is so severe that some—if not most—of the raised features of the coin will have been worn down.

In terms of the price you will pay for an 1808 Large Cent, this is something that is determined by the grade the coin receives. With coins that are this old, the rarity of the piece is also taken into consideration when determining a price. The chart below will help you gain a better understanding of what you might be asked to pay for an 1808 Large Cent given its grade.