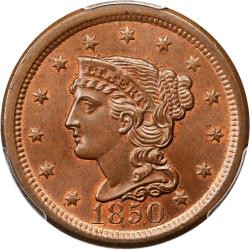 The 1850 Liberty Head Large Cent is one of the last editions of a coin whose history is as rich as the history of the US Mint itself. The coin might have been produced a long time ago, but it is still popular today amongst collectors of all types. Being that there is only a select few remaining on the market, there has never been a better time to make a purchase.

On the obverse side of the coin, the image of Lady Liberty can be found directly in the center, in great detail. Resting upon Lady Liberty’s head is a band, and within that band there is an inscription which reads “Liberty.” Below the Liberty inscription there is another inscription, this one marking the 1850 year of minting. Finally, around the outside of the obverse you will notice 13 stars, each one marking the 13 original colonies of the United States.

On the reverse side of the coin, the center is marked by an inscription which reads “One Cent,” the coin’s face value. Completely surrounding this is the image of a wreath. The image of the wreath is breathtaking due to the incredible detail presented on a coin so old. There is one last inscription, this one reading “United States of America.” Finally, it must also be mentioned that, on both sides of the coin, the very outer edges are marked by raised rays which give the coin a bit of added texture.

For collectors, the unfortunate reality nowadays is that coins are counterfeited quite frequently. Because of that, and because collectors are constantly trying to protect themselves from those counterfeits, they will only settle for the coins that have been graded and determined to be authentic. Below, we have outlined the different coin grades as well as what they mean for the appearance of an 1850 Liberty Head Large Cent.

Uncirculated: A coin that has been graded as Uncirculated is one that never spent any time on the open market. From the day they were minted up until today, these pieces have been kept in perfect condition and will look today exactly like they did in 1850.

Extremely Fine: An Extremely Fine coin is one that might have been circulated a bit, but did not incur too much damage. These pieces will show a few signs of damage such as scratches, but will look to be in great condition nonetheless.

Good: Good is the grade given to the worst, most heavily damaged Liberty Heads out there. You will notice deep scratching and significant smoothing, sometimes so much so that you will not even be able to decipher the imagery with your naked eyes.

When it comes to the price you might be asked to pay for an 1850 Liberty Head, this can be determined by the condition the coin is in. If a coin is well-preserved, it only follows that it will carry a higher price than those that have been heavily damaged. What’s more, the total number of coins for sale will also come into play. If there are an abundance up for sale, they will carry a lower price than the coins that exist in limited quantities. Below, you will find a chart aimed at giving you a better idea of what you might be asked to pay for a graded 1850 Liberty Head.