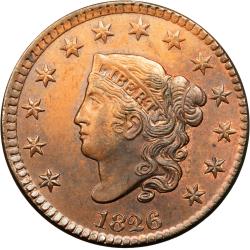 The 1826 Liberty Head Large Cent is a highly sought after US coin, and one that is becoming increasingly difficult to acquire. The coin’s age assuredly makes it desirable, but the design of the coin is also interesting and unique. These coins are extremely rare and will be a great addition to any collection, large or small.

On the obverse side of the 1826 Liberty Head, the center of the face is dominated by the leftward-facing Lady Liberty. Sitting upon the head of Lady Liberty is a band, within which the word “Liberty” is inscribed. Beneath the central image is another inscription, this one marking the 1826 year of minting. Finally, the outside of the obverse side of the coin features 13 stars, representative of the 13 original colonies of the United States.

On the coin’s reverse, the center is marked by an inscription marking the “One Cent” face value. Surrounding this is the image of an ornate wreath, with a lot more detail than you might expect from a coin so old. Surrounding all of this is another inscription, this one reading “United States of America.” Finally, the very outer edges of both the obverse and reverse of the 1826 Liberty Head are marked by raised rays, which give the coin a bit of added texture.

When it comes to collectors, the prospect of owning an 1826 Large Cent is exciting, but is also something to be wary of. The fact of the matter is that these coins are counterfeited quite often. Due to this, only Large Cents that have been graded and certified as being authentic will be purchased. Below, you will find an outline of the different coin grades as well as what those grades mean for the appearance of the Large Cent.

Uncirculated: A coin determined to be of Uncirculated is one that, quite literally, never made it out onto the open market. Because they have never been circulated, these coins will look today exactly like they did back in 1826.

Fine: Fine is the grade given to coins that were circulated for a good bit of time. During their time in circulation, these pieces will feature light scratching, light smoothing, and other small signs of wear and tear.

Good: Good is the worst grade a coin can receive, and one that is indicative of a piece that has been heavily circulated and damaged. These pieces will feature a lot of scratches and other signs of damage, but are still sought after nonetheless.

In terms of determining a price for the 1826 Liberty Head Large Cent, this is something that can be done by taking into consideration both the scarcity and condition of the coin. If the coin is scarce, and there are not very many of them around, the price you will have to pay will inevitably be pushed upward. If the condition is great, it will also be a more expensive coin. Below, there is a chart aimed at giving you a better idea of what an 1826 Liberty Head might cost given its grade.