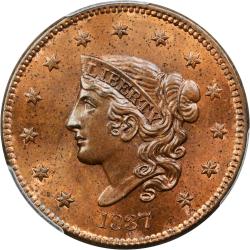 The 1837 Liberty Head Large Cent is not only a piece of American history, it is a coin that collectors of all walks of life absolutely cannot wait to get their hands on. Even though this coin was produced very long ago, there are still plenty for sale today. With that being said, the total number of Liberty Heads available is always decreasing, so there has never been a better time to get your hands on one.

On the obverse side of the 1837 Large Cent, the image of Lady Liberty can be seen in the center. Sitting upon Lady Liberty head is a band, and within that band is an inscription which reads “Liberty.” Beneath the central image is another inscription, this one marking the 1837 year of minting. Finally, there are 13 stars surrounding the central image. Each star is representatives of one of the 13 original colonies.

On the reverse side of the coin, the “One Cent” face value can be found in the center. Surrounding this is an ornate wreath. The wreath had also been present on previous editions of the Large Cent, however the Liberty Head variety sees the wreath depicted with a bit more detail. Finally, the phrase “United States of America” is around the outside of the wreath. On the very outer edges of both faces of the coin there are raised rays which add a bit of texture to the coin.

The 1837 Liberty Head is one of those coins that is highly collectible. At the same time, these pieces have been counterfeited frequently. Because of this, collectors will only settle for those Liberty Heads that have been graded and certified as being authentic. Below, you will find the different coin grades as well as what those grades mean for the appearance of the Liberty Head.

Uncirculated: An Uncirculated Liberty Head is a coin that never made it out onto the open market. Because these coins never exchanged hands, they will look today exactly like they did when they were first minted. As you might expect, these are the absolute most sought after Liberty Heads.

Extremely Fine: A coin determined to be of Extremely Fine grade is one that might have been lightly circulated, however it will not show many signs of damage. Though there may be some small scratching, the coin will, for the most part, appear to be in pristine condition.

Fine: Fine is the grade given to coins that have been circulated for an extended period of time, but were taken out of circulation before too much damage could occur. On the surfaces of these coins, you will notice some light scratching and smoothing.

Good: Good is the grade given to the worst of the worst coins. These pieces will have been heavily worn and damaged, and will have definitely seen their better days. Despite this, these Liberty Heads are still quite popular amongst collectors.

When it comes to assigning a price to the 1837 Large Cent, this can be done by assessing the condition the coin is. As you might expect, the more well-preserved a coin is the more expensive it is going to be. In addition to condition, you must also look at scarcity. If there are only a few pieces for sale at any given point in time, the price, per coin, will be more than if there were an abundance for sale. Below, you will find a chart aimed at giving you a better idea of what you might expect to pay for an 1837 Liberty Head given its grade.