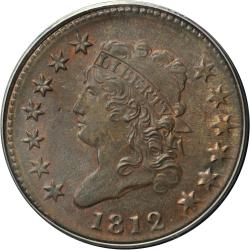 The 1812 Classic Head Large Cent is one of many US coins that can best be described as absolutely irresistible to collectors. These pieces are not only very old, they feature a design that was only utilized for a short period of time. Being that there are not very many of these coins still remaining, now is as good a time as ever for you to get your hands on one.

On the obverse side of the Classic Head Large Cent, you will see that the image of Lady Liberty is dominating the central aspect of the face. As opposed to previous years, where she was facing rightward, Lady Liberty appears to be looking off to the left. Inscribed upon a band on Lady Liberty’s forehead is the word “Liberty.” On either side of the central image are clusters of stars. The 13 total stars exist as a way to commemorate the 13 original colonies of the United States. Finally, the 1812 year of minting is indicated at the bottom of the coin.

On the reverse of the 1812 Classic Head, the central part of the coin is taken up by a raised inscription which reads “One Cent.” Completely encircling the face value inscription is a wreath. As opposed to previous editions of the Large Cent, the wreath on this coin is continuous and unbroken. Finally, there is an inscription around the outer edge of the reverse which reads “United States of America.”

For coins as old as the 1812 Classic Head Large Cent, collectors will not settle for just any piece. Rather, because of the many counterfeits there are that exist, collectors will only purchase those coins that have been certified as being authentic and have been graded. Below exists an outline of the different coin grades as well as what those grades might mean for the appearance of the 1812 Classic Head Large Cent.

Uncirculated: A Large Cent that is determined to be of Uncirculated grade is one that, quite literally, never spent any time on the open market exchanging hands. As a result, these pieces will appear today exactly as they did the moment they were minted all the way back in 1812.

Extremely Fine: An 1812 Classic Head Large Cent that is determined to be of Extremely Fine grade is one that will have a few signs of wear even though it was probably never circulated. Though the scratches and/or chips that you will find on these coins will be hardly noticeable, they are still taken into consideration through the grading process.

Fine: A coin determined to be of Fine grade is one that was probably circulated for a period of time, but taken out of circulation before it could become too heavily damaged. These pieces will show signs of wear such as some smoothing as well as light, consistent scratching, but will be mostly in good shape.

Good: Good is the worst grade a coin can receive and is indicative of a piece that has been heavily worn due to years of circulation. These coins are so damaged that some of the imagery and lettering on the surface of the coin will have been almost completely worn away.

In terms of determining a price for the 1812 Classic Head Large Cent, this is something the depends on a few factors. For one, these coins are rare. Because of this rarity, these coins will inherently be valuable. Beyond this, the condition of the coin means a lot. Basically, the more well-preserved a coin is, the more you are going to pay for it. Below exists a chart aimed at giving you a better idea as to what you might be asked to pay for an 1812 Classic Head given its grade.