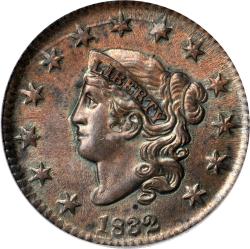 When it comes to coins like the 1832 Liberty Head Large Cent, there is, quite frankly, no serious collector who does not want to get their hands on one. There are plenty still available, but since the coin was produced all the way back in 1832, the total number available is decreasing at a steady rate. For this reason, there has never been a better time to get your hands on one.

On the obverse side of the 1832 Liberty Head Large Cent, the center is dominated by the highly detailed image of Lady Liberty. Inscribed upon a band that is resting on her head is the word “Liberty,” while the 1832 year of minting is situated towards the bottom of the coin. Around the outside of all of this are 13 stars, representative of the 13 original colonies of the United States.

On the coin’s reverse, the central part of the coin is inscribed with the “One Cent” face value. Around this is an ornate wreath with an incredible amount of detail. An inscription is situated around the outside of all of this, and that inscription reads “United States of America.” Situated on the very outer edges of both the obverse and reverse sides of the Liberty Head Large Cent are raised rays, which give the coin some added texture.

For collectors, the unfortunate reality is that the 1832 Liberty Head Large Cent is a coin that has been counterfeited quite frequently. Due to this, serious collectors will only settle for those Liberty Heads that have been officially graded and certified as being authentic. Below, we have outlined the different coin grades as well as what those grades might mean for the appearance of the 1832 Large Cent.

Uncirculated: A coin determined to be of Uncirculated grade is one that, in all likelihood, never made it out onto the open market. As a result of this, you will notice absolutely no signs of damage, and the coin will look today the same as it did all the way back in 1832 when it was minted.

Extremely Fine: A coin that is determined to be of Extremely Fine grade was probably never circulated, but is not free from damage. Some way or another, these coins will have suffered some sort of damage, albeit small. Whether we are talking a few chips or scratching, there will be some noticeable damage.

Fine: A coin that is determined to be of Fine grade is one that spent a good bit of time in circulation, but has not been so heavily damaged. These pieces will be subject to some light scratching and chipping, but all of the surface imagery and lettering will still be fully intact.

Good: As far as coin grades go, they really don’t get much worse than Good. Understanding this, it almost goes without saying that these coins play host to a large amount of damage resulting from years and years of circulation. Despite some major imperfections, these coins are still highly sought after by collectors from all over the world.

In terms of the price you might be asked to pay for a Liberty Head Large Cent from 1832, that much depends on the condition of the coin as well as how many are for sale at the moment in time. Naturally, the fewer there are for sale, the price you will pay, per coin, will be larger than editions of the Large Cent that are plentiful. In addition, the condition of the coin means a lot. The more well-preserved a coin is, the more expensive it is likely going to be. Below, you will find a chart aimed at giving you a better idea of what you might be asked to pay for an 1832 Liberty Head Large Cent given its grade.