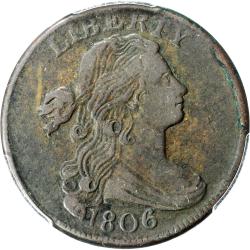 The 1806 Draped Bust Large Cent is one of those coins that collectors will do absolutely anything to get their hands on. Not only is the coin extremely old, it is a piece of American history and one of only a few remaining. Being that these coins exist in limited numbers at the present moment, there has never been a better time to get your hands on one.

On the obverse side of the 1806 Draped Bust, you will notice that there is the image of Lady Liberty situated in the center. The bust of Lady Liberty is partially covered by a drape, and that is why the coin is called what it is. Above the central image is an inscription which reads “Liberty,” while the 1806 year of minting is inscribed towards the bottom of the face. Around the outer edge of both the obverse and reverse sides are 100 individual dots which give the coin some texture.

On the reverse side of the 1806 Draped Bust Large Cent, you will notice an inscription in the center that reads “One Cent.” Partially surrounding the one cent face value inscription is a wreath which is loosely tied together with a bow. Surrounding all of this is yet one more inscription which reads “United States of America.” Finally, just beneath the bow is a “1/100” inscription, which marks the coin’s value relative to a whole dollar.

In terms of the 1806 Draped Bust, collectors need to guarantee that the coin in their position is, in fact, 100% authentic. With so many counterfeits in circulation today, having the coin certified is a must. Below exists as an outline which lays out the different coin grades as well as what those grades mean for the appearance of the Large Cent.

Uncirculated: If you have an 1806 Draped Bust Large Cent—and very few people do—you have a coin that has never been circulated. From the moment these coins were minted they were kept in safekeeping and, because of this, will have had their condition perfectly preserved.

Extremely Fine: Extremely Fine is the grade given to coins that have not been circulated, but are also not free from damage. Though the damage you will find is usually small and insignificant, it is noticed during the grading process and taken into account.

Fine: Fine is the grade given to coins that have been circulated, but not so heavily that the raised imagery and lettering on the surface will have been compromised. You will notice some light and consistent scratching, but the coin will be in decent shape considering its 200+ year age.

Good: Good is the grade given to coins that have been both extremely heavily circulated as well as extremely heavily damaged. These pieces will show plenty of signs of wear, so much so that some of the raised aspects of the surfaces will have been worn away entirely.

In terms of assigning a nominal price to the 1806 Draped Bust, this is something that really depends upon the condition of the coin. As the coin’s condition improves, the price you will be asked to pay for it will increase. Below is a chart aimed at giving you a better idea as to what you might expect to pay for an 1806 Draped Bust given its grade.