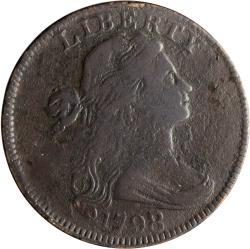 The 1798 Draped Bust Large Cent, like most coins produced before the turn of the 19th century, is incredibly sought after and valued by collectors. Not only are they seen as a piece of American history, these are coins that have been around for more than 200 years. Because of this age, it goes without saying that there are only a limited number of these coins still around. As such, there has never been a better time to get your hands on one.

On the coin’s obverse, the central part of the face is dominated by a raised image of Lady Liberty. Above Lady Liberty’s image is a raised inscription which reads “Liberty,” while the 1798 year of minting is listed underneath. Finally, it must also be noted that the outer edges of both the obverse and reverse sides of the coin are marked by 100 individual, raised dots.

The reverse side of the 1798 Large Cent features in the middle a raised inscription marking the “One Cent” face value of the coin. Partially surrounding the central face value is a detailed wreath, bound together by a bow. There is also a raised inscription around the wreath that reads “United States of America.” Finally, there is another inscription marking “1/100,” which is the value of the Large Cent relative to a whole dollar.

When it comes to collectors, there are very few out there who will settle for Large Cents that have not been graded. With counterfeiting an unfortunate part of today’s world, collectors are only going to want to get their hands on the pieces that have been certified as being authentic. Below is an outline of the different coin grades as well as what these grades mean for the appearance of a 1798 Large Cent.

Uncirculated: If a 1798 Large Cent is determined to be of Uncirculated grade, this means that the coin has never made it into the open market. Though there are very few of these coins around, they will appear today just as they did when they were minted in 1798.

Extremely Fine: If a 1798 Large Cent is graded as being Extremely Fine, this means that it has probably never been circulated, but is not free of damage. You might notice a scratch or two, but apart from these minor imperfections these coins will appear to be pristine.

Fine: A coin that is determined to be of Fine grade is one that was circulated for a time, but not very heavily damaged. You will notice that there are plenty of signs of standard wear and tear—including scratching and smoothing—but the coin will still look to be in decent shape.

Good: Good is the worst grade a coin can receive, and is usually indicative of a piece that has been very heavily circulated and damaged. These pieces will have been heavily scratched and smoothed to the point that the raised imagery and lettering might have been compromised, if not partially, completely.

When it comes to determining the value of a 1798 Large Cent, this is something that is heavily dependent upon the condition it is. While most of these coins have been heavily worn in one way or another, those that have survived the years in decent shape are worth exponentially more than those that haven’t. Despite this, every surviving 1798 Large Cent will fetch a pretty penny. Below, there is a chart aimed at giving you a better idea as to what you might be asked to pay for a 1798 Large Cent given its grade.