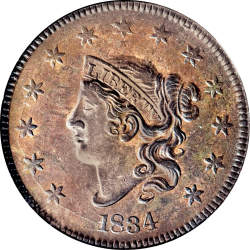 The 1834 Liberty Head Large Cent is a coin that collectors from around the world will do absolutely anything to get their hands on. Though very old, there are still plenty of these coins available for purchase, and they are being added to collections all the time. With that being said, the number of 1834 Liberty Heads available is decreasing all the time, meaning that there has never been a better time than now for you to get your hands on one.

On the obverse side of the 1834 Liberty Head, the center of the coin is dominated by the leftward facing image of Lady Liberty. The ornate image sees Liberty sporting a band on her head, and within that band is an inscription which reads “Liberty.” Below the central image of Lady Liberty you will notice the 1834 year of minting inscribed. Finally, there are 13 stars around all of this, representing the 13 original colonies of the United States.

On the reverse side of the Liberty Head, the “One Cent” face value is inscribed upon the center of the face. Encircling the face value inscription is the image of an ornate wreath. The wreath is similar to earlier editions of the Liberty Head, however there is a bit more detail on the Liberty Head’s wreath. Finally, the phrase “United States of America” is inscribed on the outside of the wreath. It must also be mentioned that on the very outer edges of both sides of the coin there are raised rays, which gives the coin a bit of added texture.

For collectors, the simple fact of the matter is that 1834 Large Cents—and most other Large Cents, for that matter—are counterfeited quite frequently. As a result of this, collectors will only want to get their hands on Liberty Heads that have been graded and certified as being authentic. Below, we have listed the different coin grades as well as what those grades mean for the appearance of the 1834 Large Cent.

Uncirculated: An 1834 Large Cent that is determined to be of Uncirculated grade is one that, quite literally, never exchanged hands. Rather, these coins were kept in safekeeping from the time they were minted until today. As such, they have been preserved in near pristine condition.

Extremely Fine: An Extremely Fine Liberty Head Large Cent is one that may or may not have been circulated, but will be complete with a few minor signs of damage. Though the damage we are talking about is usually as minor as a single scratch, it is enough to take the coin from Uncirculated to Extremely Fine.

Fine: Fine is the grade given to 1834 Liberty Heads that were circulated for a period of time, but taken out of circulation before too much damage could occur. These pieces will show plenty of signs of wear and tear, but will, for the most part, be well-preserved.

Good: Good is the worst grade a coin can receive, and is indicative of a piece that spent a good bit of time in circulation. These pieces will be extremely heavily damaged thanks to years and years of circulation. Still, they are highly sought after by collectors.

When it comes to the price you might be asked to pay for the 1834 Liberty Head Large Cent, this is something that can be determined by a few different factors. First, the condition of the coin means everything. A more well-preserved piece is going to cost more than a coin that has been heavily damaged. Beyond that, it all comes down to scarcity. The fewer Liberty Heads there are, the more expensive they are going to be. The chart below is aimed at giving you a better idea of what an 1834 Liberty Head Large Cent might cost given its grade.