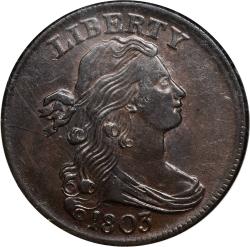 The Draped Bust Large Cent is a product of a few failed design attempts. The 1803 version of the Draped Bust is especially popular amongst collectors today for a number of reasons, but primarily because it was one of the first releases of a new coin design. Now that these coins are well over 200 years old, it goes without saying that there are very few remaining. As such, there has never been a better time than now to get your hands on one.

On the obverse side of the coin, you will notice that the center features a bust of Lady Liberty, who is facing rightward. Towards the bottom of the bust, Lady Liberty is covered by a drape, hence the coin’s name. Above the central image is an inscription which reads “Liberty,” while the 1803 year of minting can be found towards the bottom of the obverse side. All along the outer edges of both the obverse and reverse sides of these coins are 100 individual, raised dots.

On the reverse side of the coin, the center is marked by a raised inscription marking the coin’s “One Cent” face value. Around the face value is a wreath that is tied together by way of a bow. Surrounding the wreath is another raised inscription, this time it reads “United States of America.” Finally, just beneath the bow is a raised “1/100” inscription, marking the coin’s value relative to the value of a whole dollar.

For collectors, it is a necessity that coins this old are certified and guaranteed to be authentic. Because there are so many counterfeits circulating around the market today, only those Large Cents that have been graded will be worthy of collecting. The different coin grades as well as what those grades mean will be outlined below.

Uncirculated: A coin that is determined to be of Uncirculated grade are those 1803 Draped Bust Large Cents that have been kept in safekeeping since the day they were minted. Though there are only a few of these remaining, those that are still around will look pristine.

Extremely Fine: A coin that has been graded as being Extremely Fine is one that was probably never circulated, however it may be home to some sort of damage. Whether it is a small scratch or chip, there will be some sign of damage.

Fine: Fine is the grade given to Large Cents that have been fairly heavily circulated, however not too heavily damaged. Thanks to years of exchanging hands you will notice some smoothing and chipping, but all of the imagery and inscriptions should still be perfectly intact.

Good: Good is the grade given to the absolutely most heavily damaged Draped Busts that exist. These coins will have been circulated for an extended period of time and will show signs of that circulation. From deep scratching to the complete wearing away of surface imagery, these coins will have definitely seen their better days.