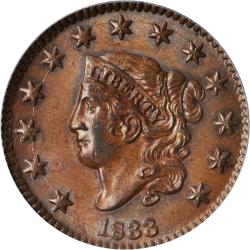 The 1833 Liberty Head Large Cent is a coin that most collectors cannot simply pass on. Whether it is due to the historical significance, attractive design, or the simple fact that there are only a few left on the market, there is always a demand for these pieces. As time moves forward, however, the number of 1833 Liberty Heads remaining decreases, so now is the best time to get your hands on one.

On the coin’s obverse, the central part of the face is dominated by the image of Lady Liberty. Liberty, facing leftward, is depicted wearing a band upon her head. Inscribed within this band is the word “Liberty,” while the 1833 year of minting is indicated by an inscription just below Liberty’s image. Finally, there are 13 stars around the outside of the coin, each star representative of one of the original 13 colonies of the United States.

On the reverse side of the 1833 Liberty Head, the center is marked by the “One Cent” face value inscription. Around this is a wreath which is depicted in stunning detail, especially when you consider the crude technology of the time. Finally, the words “United States of America” surround both the wreath and the face value inscription. It must also be mentioned that on the very outer edges of both sides of the coin there are raised rays, which give the coin more texture.

For collectors, the fact that the 1833 Liberty Head Large Cent has been counterfeited so frequently is a cause for concern. Because of this, the only coins collectors want to purchase are those that have been graded and certified as being authentic. Below, we have listed the different coin grades as well as what that grade means for the appearance of the Liberty Head.

Uncirculated: a coin determined to be of Uncirculated grade is one that, quite literally, never spent any time on the open market. From the day these pieces were minted they were kept in safekeeping. As a result, these coins will show absolutely no signs of damage.

Extremely Fine: A coin determined to be of Extremely Fine grade is usually one that has never been circulated, or was circulated for a very brief period of time. These Liberty Heads will show very minor signs of damage, but other than that will appear to be in mostly pristine condition.

Fine: A coin determined to be of Fine grade is one that was circulated for a long period of time and damaged during that time. The damage, however, is usually nothing major and comes in the form of light scratching and smoothing. All in all, these coins will appear to be in solid condition.

Good: An 1833 Liberty Head that is determined to be of Good grade is one that spent a lot of time in circulation and was damaged as well. These pieces will be so heavily worn and damaged that some of the surface imagery and lettering might have been worn away completely.

When it comes to determining a price for the 1833 Liberty Head, you really do not need to look much further than the condition. Of course, scarcity matters as well, but more often than not collectors will concern themselves primarily with the condition of the coin, as no one wants to add a damaged coin to their collection. Below, you will find a chart aimed at giving you a better idea of what you might be asked to pay for an 1833 Large Cent given its grade.