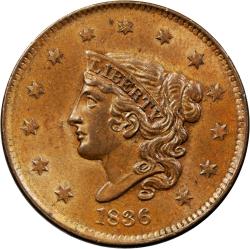 The 1836 Liberty Head Large Cent is one of those coins that collectors cannot simply shy away from. Whether it be the historical significance that the coin carries, or the fact that its design is highly intricate for a coin so old, these pieces flat-out fly off the shelves and into collections every day. Understanding this, now is the best time to get your hands on one.

As for the obverse side of the 1836 Liberty Head Large Cent, the center of the face is dominated by a large depiction of Lady Liberty. The image of Liberty shows her facing leftward, and inscribed within a band that is resting upon her head—fittingly enough—is the word “Liberty.” Beneath the central imagery is an inscription marking the 1835 year of minting. Finally, partially encircling the image of Lady Liberty are 13 stars, one for each of the 13 original colonies of the United States.

On the reverse side of the Liberty Head, the “One Cent” face value is inscribed in the very center of the face. Surrounding this is the image of a wreath. Though plain, the wreath is depicted in stunning detail. Finally, the words “United States of America” line the outside of the reverse. Something else that should not be neglected is the fact that the very outer edges of both faces of the coin feature raised rays.

For collectors nowadays, the unfortunate reality that needs to be faced is that coins like the 1836 Liberty Head are counterfeited. As a result, collectors will not simply settle for just any Liberty Head to be added to their collection. Instead, they will only purchase those pieces that have been graded and certified as being authentic. Below, we have outlined the different coin grades as well as what those grades might mean for the appearance of the coin.

Uncirculated: An Uncirculated Liberty Head has been stored in safekeeping from the day it was minted until today. Thanks to this protection, the coin will appear as though it was just freshly minted. Being so pristine, it should come as no surprise that collectors will pay top dollar for them.

Fine: A Liberty Head that is graded as being Fine is one that was circulated for a period of time, but removed from circulation and placed in safekeeping before too much damage could occur. These coins will show plenty of signs of wear, ranging from scratching to smoothing and anything in between.

Good: Good is the lowest grade an 1836 Liberty Head can receive. These pieces will be extremely damaged, sometimes so much that the surface imagery and lettering might have been worn away.

In order to determine a price for the 1836 Liberty Head Large Cent, the condition of the coin is the first thing you need to look at. Naturally, the more well-preserved a piece is, the higher the asking price can and will be. Beyond that, it comes down to scarcity. If there are a lot of 1836 Liberty Heads on the market, the price, per coin, will be lower than an instance where there are but a few for sale. Below, you will find a chart that is aimed at giving you a better idea of what you might be asked to pay for an 1836 Liberty, given its grade.