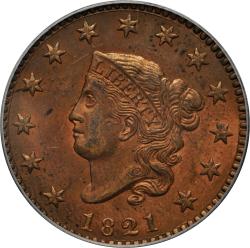 The 1821 Liberty Head Large Cent is sought after by collectors from all walks of life, primarily due to its rarity. The coin was produced so long ago that it should come as no surprise that the quantity remaining is decreasing all the time. For this reason, there has never been a better time for collectors to get their hands on one of these coins.

On the reverse side of the coin, the words “One Cent” dominate the middle. Surrounding the face value inscription is an ornate, circular wreath. Finally, the words “United States of America” are surrounding the wreath. It must all be mentioned that, on the obverse and reverse sides of the Liberty Head Large Cent, the outer edges feature raised rays.

Uncirculated: A coin determined to be of Uncirculated grade is one that never made it onto the open market to exchange hands. Having been preserved from the day it was minted, these coins will appear to be in pristine condition.

Extremely Fine: A coin determined to be of Extremely Fine grade is one that probably never spent time in circulation, but will have some minor signs of damage. These pieces will, by most accounts, still be in pristine condition.

Fine: Fine is the grade given to Liberty Head Large Cents that have been circulated, but do not feature a large amount of damage. There will be some light scratching and even some smoothing, but for the most part these coins will be in decent condition.

Good: Good is the worse grade a coin can receive. These coins have usually been circulated for an extended period of time and are host to plenty of signs of that circulation. From deep scratching to significant smoothing, these coins have definitely seen their better days.

In terms of determining a price for the 1821 Liberty Head Large Cent, this is something that is determined by both the scarcity and condition of the coin. Naturally, the fewer coins there are, the more expensive they are going to be. In the same way, the more well-preserved a coin is, the more expensive it is going to be. The chart below will serve as a guide for determining just how much you might be asked to pay for an 1821 Liberty Head Large Cent, given its grade.