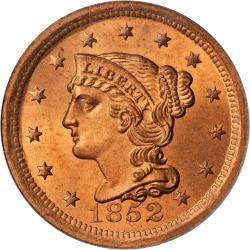 The 1852 Liberty Head Large Cent is a coin that is desired by collectors from both the US and abroad due to its historical significance and its age. When it comes down to it, these pieces are quite old and there is an ever-decreasing number of them available. As such, there has never been a better time than now for you to get your hands on one.

On the obverse side of the coin, the center of the face is marked by the inscription of the image of Lady Liberty. Lady Liberty is depicted in stunning detail and features a band upon her head, and within that band is an inscription which reads “Liberty.” Beneath the central imagery is another inscription, this one marking the 1852 year of minting. Finally, there are 13 stars on the obverse, each marking the 13 original colonies of the United States.

On the reverse side of the coin, the center of the face features an inscription which reads “One Cent.” Surrounding this central inscription is a wreath. The wreath is amazing simply because of the detail present. Around all of this is one more inscription, this one reading “United States of America.” One more feature worth noting are the rays present on the very outer edges of both the obverse and reverse sides of the coin.

In terms of collecting the Liberty Head Large Cent, the fact of the matter is that collectors are constantly trying to defend themselves from the unruly practice of counterfeiting. Their main source of protection comes in the form of only buying graded, certified pieces. Below, we have outlined the different coin grades as well as what those grades mean for the appearance of the coin.

Uncirculated: If a coin is determined to be of Uncirculated grade, this means that the piece was, quite literally, never circulated. As such, these pieces will be in perfect condition and resemble a coin that was just minted recently, rather than well over 100 years ago.

Extremely Fine: A coin that receives the Extremely Fine grade is one that will be in near-perfect condition, save for a few minor flaws. Whether it is a single scratch or small chip, these coins will show some minor signs of damage. Still, they will appear to be in great shape, especially if you consider their age.

Fine: Fine is the grade given to coins that have been heavily circulated, however they have not been too heavily damaged. These pieces will be present with light, consistent scratching on both surfaces, but none of the damage will be so severe that the surface imagery and lettering will not have been worn away.

Good: Good is the grade given to the absolutely worst-preserved coins. These pieces will have been extremely heavily circulated and extremely heavily damaged as well. On occasion, the damage is so severe that some of the surface imagery and lettering might have been completely worn away.

For collectors, the number one concern they will have is with regard to the price they will pay for a Liberty Head Large Cent. In order to determine this, you need to first look at the condition/grade of the coin. Naturally, it follows that the more well-preserved a coin is, the higher the cost is going to be. In addition to this, the total number of coins on the market at any given time will also play into the price you are asked to pay. The fewer coins there are for sale, the more expensive an individual coin is going to be. Below, there is a chart aimed at giving you a better idea of what you might be asked to pay for a graded 1852 Liberty head Large Cent.