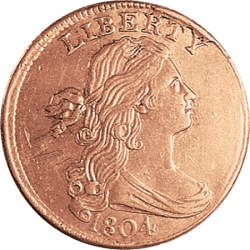 The 1804 Draped Bust Large Cent is an iconic coin that is the apple of just about any collector’s eye. Not only is this coin extremely old, it is a valuable piece of US history. Being that there were only ever a limited number of these coins minted, and the number of those remaining is decreasing all the time, there has never been a better time than now to get your hands on one.

On the obverse side of the 1804 Draped Bust Large Cent the central aspect is dominated by the rightward facing bust of Lady Liberty. Towards the bottom of the bust you can see a covering, or drape, and this is why the coin is called what it is called. Above the central image is an inscription which reads “Liberty.” Below the central image is an inscription marking the 1804 year of minting. Finally, around the outer edges of both the obverse and reverse sides there are 100 individual, raised dots which add a bit of texture to the coin.

On the reverse side, the center features a “One Cent” inscription, marking the coin’s face value. Around the central inscription is a wreath that is loosely tied together by a bow. Finally, there is an inscription which reads “United States of America” surrounding both the face value and the wreath. Directly underneath the wreath’s bow, a “1/100” inscription marks the Large Cent’s value relative to the value of 1 dollar.

In terms of the condition of the 1804 Draped Bust Large Cent, this is something that must be assessed by a professional grading service. If a coin isn’t graded, collectors will be wary of it due to the large number of counterfeit coins making rounds nowadays. Below is an outline of the different coin grades as well as what those coin grades mean for the appearance of an 1804 Draped Bust Large Cent.

Uncirculated: If an 1804 Large Cent is determined to be of Uncirculated grade, this means that the piece never made it out into the open market. As such, it will be in pristine condition just like it was the day it was minted.

Extremely Fine: A Draped Bust determined to be of Extremely Fine grade is one that probably never spent any time in circulation, but will still have some signs of damage or wear. Though the damage is usually insignificant, it is still there and able to be noticed.

Fine: A coin that is determined to be of Fine grade is one that was circulated for a period of time, but taken out of circulation before too much damage could occur. These coins will show signs of wear such as scratching and chipping, but the raised imagery and lettering should still be mostly intact.

Good: A coin determined to be of Good grade is one that was both heavily circulated and heavily damaged. These pieces will have been so heavily worn that you might not even be able to make out some of the finer details. Still, they are a valuable addition to just about any and every collection.

In order to determine a price for the 1804 Draped Bust Large Cent, you really do not need to look much further than the condition that the coin is in. Those coins that have been well-preserved will far outprice the coins that have been heavily damaged. In order to get a better idea as to what you might be charged for one of these coins, utilize the chart that exists below.