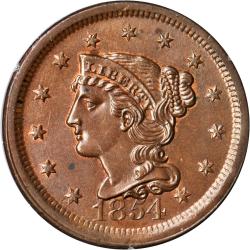 The 1854 Liberty Head Large Cent is a coin that is highly collectible and sought after by collectors from the US and around the world. The coin may be old, but it is incredibly popular because of its historical significance and waning quantities available. Though there are plenty of Liberty Heads available for sale, that number is decreasing all the time. As such, there has never been a better time than now to get your hands on one.

On the coin’s obverse side, the center of the coin is marked by the image of Lady Liberty, who is facing leftward. There is a band resting upon Lady Liberty’s head, and within that band the word “Liberty” is inscribed. Beneath the central image there is another inscription, this one marking the 1854 year of minting. Finally, around the outside of the coin there are 13 stars, each one representing one of the 13 original colonies of the United States.

On the reverse side of the coin, the center of the face is dominated by an inscription which marks the “One Cent” face value. Surrounding this, there is the image of a beautiful, circular wreath. On the outside of that, there is one more inscription, reading “United States of America.” On the very outer edges of both sides of the coin there are raised rays, and these rays give the coin a bit of added texture.

For collectors, the fact that the 1854 Liberty Head is as frequently counterfeited as it is means that something must be done in order to protect themselves from these counterfeits. As a way of doing this, collectors will only settle for purchasing those coins that have been graded and certified as being authentic. Below, you will find an outline of the different coin grades as well as what those grades mean for the appearance of the coin.

Uncirculated: A Liberty Head that is determined to be of Uncirculated grade is one that never spent any time at all on the open market. Having been preserved from the day they were minted, these coins will appear to be in the same condition today as it was back in 1854.

Extremely Fine: A coin determined to be of Extremely Fine grade is one that might have been circulated, but not for a very long period of time. When it comes down to it, the damage you will notice on these coins is extremely small.

Fine: A coin determined to be of Fine grade is one that spent a good bit of time in circulation, however the damage on these coins is not overly significant. You will notice some light scratching and smoothing on the surfaces of the coin, however none of the imagery nor lettering will have been compromised.

Good: Good is the lowest grade a coin can receive, and indicative of a coin that has been extremely heavily circulated and damaged. The damage on the surface of these coins is so significant that some of the imagery and lettering might have been compromised altogether.

In order to determine a price for the 1854 Liberty, the first thing a collector or anyone else should look at is the condition the coin is in. Naturally, if the coin has been well-preserved over the years, it is likely to carry a higher pricetag than if it were overly damaged. What’s more, the quantity of coins for sale also comes into play. If there are only a few coins on the market, the price you will pay, per coin, will be more than if there were an abundance for sale. Below, you will find a chart aimed at giving you a better idea of what the price of a graded 1854 Liberty Head Large Cent might be.