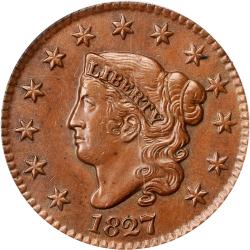 The 1827 Liberty Head Large Cent is a coin that collectors everywhere will do anything to get their hands one. Because it was produced so long ago, there are only a limited number available nowadays. As such, there has never been a better time to get your hands on one.

On the obverse of the 1827 Large Cent, the center of the face features the leftward facing image of Lady Liberty. Inscribed within a band that rests on Lady Liberty’s head is the word “Liberty,” while the 1827 year of minting is featured at the bottom of the coin. Finally, around the outside of the obverse there are 13 stars, representative of the 13 original colonies of the United States.

On the reverse side of the coin, the “One Cent” face value is inscribed into the center of the face. Around this inscription is the image of a wreath. The wreath is incredibly detailed and completely encircling the central inscription. The phrase “United States of America” is inscribed around all of the aforementioned features. Finally, the outer edges of both sides of the coin are complete with raised rays, giving the coin a bit of added texture.

For collectors, the authenticity of the 1827 Large Cent is something that is of the utmost importance. The unfortunate reality of the matter is that these coins are counterfeited quite frequently. As such, collectors will only want to purchase the coins that have been graded and certified as being authentic. Below, there is an outline of the different coin grades as well as what those grades mean for the appearance of the Large Cent.

Uncirculated: An 1827 Liberty Head Large Cent that is determined to be of Uncirculated grade is one that never spent any time on the open market and never exchanged hands. Because of this, these coins will be in pristine condition and will look today exactly as they did back in 1827.

Extremely Fine: One step down from Uncirculated is the Extremely Fine grade. This grade is indicative of a coin that might not have been circulated, but is not free from damage. Though the signs of damage are small and sometimes hardly noticeable, they will be noticed during the grading process.

Fine: Fine is the grade given to coins that have been circulated quite extensively, however the damage is not so significant that the raised imagery and lettering will be worn away. You will notice light, consistent scratching, but the coin will still appear to be in great shape.

Good: Good is the worst grade a coin can receive, and is indicative of a piece that has undergone a lot of circulation and damage. These pieces will have exchanged hands many times throughout the years, and this has resulted in a lot of damage. Despite this, Good 1827 Liberty Heads are still highly sought after.