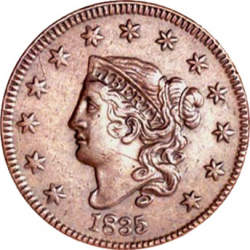 The 1835 Liberty Head Large Cent is a coin that was produced a long time ago, but is extremely popular nowadays. Though there are not an unlimited number of these coins available, there are plenty on the market today. With that being said, the total number of 1835 Liberty Head Large Cents remaining is constantly decreasing. As such, there has never been a better time to get your hands on one.

On the obverse side of the 1835 Liberty Head Large Cent, the image of Lady Liberty takes up a large majority of the center of the coin. Inscribed upon a band that is resting on her head is the word “Liberty,” while the 1835 year of minting graces the bottom half of the obverse. Finally, there are 13 stars which represent the 13 original colonies of the United States.

On the reverse side of the coin, the “One Cent” face value is inscribed in the center of the face. Surrounding the face value is the image of an ornate wreath. Surrounding all of this is an inscription which reads “United States of America.” Finally, it must be mentioned that on the very outer edges of both sides of the coin, there are raised rays which give the coin some added texture.

When it comes to collectors, simply owning an 1835 Large Cent is far from enough. Rather, collectors will only want to get their hands on the pieces that have been graded and certified as authentic. The reason for this is because of the extreme amount of counterfeited coins that are out there. Below, we have outlined the different coin grades as well as what those grades might mean for the appearance of the Large Cent.

Uncirculated: A Liberty Head that is determined to be of Uncirculated grade is one that never made it out onto the open market. From the moment these coins were minted, they were kept in safekeeping. As such, they will appear today exactly as they did back in 1835.

Extremely Fine: An Extremely Fine 1835 Liberty Head Large Cent may look like it was never circulated, however there will be a few minor imperfections. These coins may only have a scratch or two, but these minor flaws are enough to downgrade the coin.

Fine: Fine is the grade given to coins that were circulated extensively, but are not so heavily damaged. You will notice some consistent, light scratching, and a few other signs of wear and tear, but none of the surface imagery or lettering will have been compromised.

Good: The Good grade is reserved for the worst of the worst. These coins will have been very heavily circulated and damaged, sometimes to a severe degree. Though there will be plenty of signs of damage, collectors still love these pieces.

When it comes to the price you might be asked to pay for an 1835 Liberty Head, this is something that depends both on the condition of the coin as well as how many are for sale. Naturally, if a coin is extremely well-preserved, it will boast a higher asking price than a piece that has been heavily damaged. In addition, if there are only a few Liberty Heads on the market at a single point in time, the price per coin is usually going to be a bit higher than if there were a plentiful number for sale. Below, you will find a chart that is aimed at giving you a better idea of what you might be asked to pay for a Liberty Head given its grade.