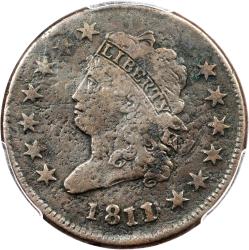 The 1811 Classic Head Large Cent is one of those coins that are especially intriguing to collectors. The main reason for this is due to the fact that the pieces were only produced for a limited number of years. As such, there are only a limited number of these coins still around, making now as good a time as ever to get your hands on one.

On the obverse of the Classic Head, you will notice the image of Lady Liberty in the center. Lady Liberty is facing to the left, and in her head is a band in which the word “Liberty” is inscribed. In previous Large Cent editions, the Liberty inscription was above the image of Liberty. To the left and right of the central image exists groupings of stars, totaling 13. These stars are representative of the 13 original colonies of the United States. Finally, on the bottom of the obverse exists an inscription marking the 1811 year of minting.

On the coin’s reverse, the central aspect is dominated by the raised face value inscription of “One Cent.” Surrounding this is the detailed image of a wreath. Something interesting about this wreath and those that existed on previous editions is that the Classic Head wreath is continuous and enclosed. Finally, an inscription which reads “United States of America” is surrounding both the wreath and the face value inscription.

The Classic Head Large Cent is such a rare coin that it is counterfeited more often than you might imagine. As such, collectors will only settle for those coins that have been professionally assessed and graded. Below exists an outline of the different coin grades as well as what those grades might mean for the appearance of the 1811 Classic Head.

Uncirculated: A Classic Head that is determined to be of Uncirculated grade is one that never spent any time on the open market. Having never exchanged hands, these coins look today exactly like they did when they were first minted.

Extremely Fine: A coin determined to be of Extremely Fine grade is one that was probably never circulated, but will still have some signs of damage. Whether it is a few scratches or chips, there will be some damage on the surfaces/edges of these coins.

Fine: Fine is the grade given to coins that had been circulated for some time, but taken out of circulation before they could be too heavily damaged. You will notice some light scratching and chipping on both sides of the coin, but they will be in mostly decent shape.

Good: Good is the lowest grade a coin can receive, and is usually indicative of a coin that has been both heavily circulated and damaged. There will be significant scratching and chipping on both sides of the coin, so much so that some of the raised imagery and lettering might have been compromised.

When it comes to determining the price you might be asked to pay for the 1811 Large Cent, this is something that will depend on a few different factors. For one, the scarcity of the coin means everything. If there aren’t many for sale, the price will be elevated. Secondly, the condition of the coin means absolutely everything. The more well-preserved the coin is, the more you will be asked to pay. The chart below is aimed at giving you a better idea as to what an 1811 Classic Head Large Cent might cost given its condition/grade.