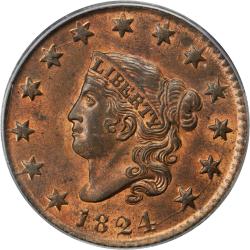 The 1824 Liberty Head Large Cent is an iconic coin, primarily due to the fact that it is so old. Nowadays, though there are only a limited number of these coins available for purchase, collectors will do anything they can to get their hands on one of these coins. As time moves on, however, the number of 1824 Large Cents will decrease, so there has never been a better time to get your hands on one.

On the obverse side of the 1824 Liberty Head, Lady Liberty’s image dominates the central aspect of the face. As opposed to previous years, Lady Liberty is facing leftward on the Liberty Head. She is wearing a band on her head, and within that band you will see the word “Liberty” inscribed. Beneath the image of Lady Liberty is an inscription indicating the 1824 year of minting. Finally, around the outer edge of the coin there are 13 stars, representative of the 13 original colonies of the United States.

On the coin’s reverse, the center is marked by an inscription which marks the “One Cent” face value. Surrounding this central inscription is the image of an ornate wreath, complete with stunning details for a coin so old. The phrase “United States of America” can be found inscribed around the wreath. On both the obverse and reverse sides of the Liberty Head Large Cent, the very outer edges are marked by raised rays, which give the coin additional texture.

For collectors, simply possessing an 1824 Liberty Head is not enough. These pieces are so old that it is not uncommon for them to have been counterfeited. As such, collectors will only pursue those pieces that have been graded and certified as being authentic. Below, we have outlined the different coin grades as well as what those grades mean.

Uncirculated: A coin determined to be of Uncirculated grade is one that, from the day it was minted, never spent any time on the open market. These coins were instead kept in a safe place from the moment they were minted. Because of this, they are in absolutely pristine condition.

Extremely Fine: A Liberty Head that is determined to be of Extremely Fine grade is one that will show very minor signs of damage. These coins might have been very briefly circulated, however the damage you will notice does not amount to much more than single scratch or two.

Fine: Fine is the grade given to Liberty Head Large Cents that have been determined to be circulated and damaged, but not so heavily that their surface imagery and lettering will have been compromised. There will be light, consistent scratching, however the coins will still be in decent shape.

Good: Good is the lowest grade a coin can receive, and usually indicates a piece that has been very heavily circulated and damaged. These coins will be so damaged that some of the raised imagery and lettering will have been completely worn away. Despite this, they are still highly sought after by collectors.

In terms of assigning a price to the 1824 Liberty Head Large Cent, this is something that can be done once you take into consideration a few different items. For one, the condition of the coin means everything. For more well-preserved pieces, the price is almost always going to be higher than those pieces that have been damaged. Another thing to look at is the scarcity of the coin. Naturally, the fewer coins there are, the more expensive they are going to be individually. The chart below will help you gain a better understanding of how much an 1824 Large Cent will cost given its grade.