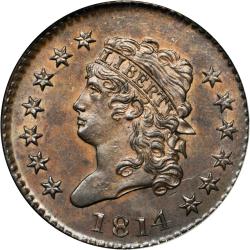 The 1814 Classic Head Large Cent is just one of many Large Cents that have been produced by the US Mint in the last 200+ years. With that being said, it is also one of the rarest coins produced by the US Mint seeing as it was only in circulation for a short period of time. Being that the total number of these coins in circulation is decreasing at a fairly rapid, pace, now is as good a time as ever to get your hands on one.

On the obverse side of the Classic Head, you will see a depiction of Lady Liberty in the center. As opposed to previous editions, Lady Liberty is facing leftward. Inscribed upon a band on her head is the word “Liberty.” To both the left and the right of the central image are groupings of stars. In total, there are 13 stars representative of the 13 original colonies of the United States. Finally, the 1814 year of minting is listed towards the bottom of the obverse.

On the coin’s reverse, the central aspect features a raised inscription that reads “One Cent.” Surrounding the central face value inscription is a detailed, ornate wreath. Unlike previous years, the wreath is continuous and not fragmented. Finally, there is an inscription which reads “United States of America” encircling both the wreath and the face value.

For collectors, the 1814 Classic Head Large Cent is one that has been counterfeited on numerous occasions. For this reason, collectors will only settle for those coins that have been officially graded and certified as being authentic. Below is an outline of the different coin grades as well as what those grades mean.

Uncirculated: By nature, a coin that is determined to be of Uncirculated grade is one that has never spent any time on the open market. These pieces will have been perfectly preserved throughout the years and will look today exactly like they did the day they were minted.

Extremely Fine: A coin that is determined to be of Extremely Fine grade is one that was probably never circulated, but is also not free from damage. These pieces will show some signs of scratching and other minor signs of wear, but will, for the most part, appear to be in extremely solid condition.

Fine: If a coin is determined to be of Fine grade, this means that it was probably circulated for a brief period of time before being put into safekeeping. These pieces, because of their time in circulation, will show damage such as light scratching and smoothing of the raised aspects.

Good: Good is the grade given to coins that have been extremely heavily circulated and damaged. These coins will be host to a lot of scratching and smoothing that is so severe, some of the coin’s raised imagery will have been completely worn away. Still, these coins are so rare that even in this condition they are highly sought after.

In order to determine a price for the 1814 Classic Head, you need to consider a few different things. For one, these coins are rare. The rarity of the coin will influence the price dramatically. What’s more, the condition of the coin will be a big deal as well. The more well-preserved a Classic Head Large Cent is, the higher the price will be. The chart below is aimed at giving you a better idea of what you can expect to pay for one of these coins given its grade.