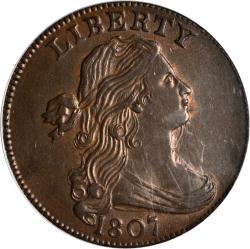 The 1807 Draped Bust Large Cent is one of the most iconic coins and is also one that is riddled with historical significance. There were never many of these pieces produced, but nowadays the number of surviving coins is incredibly small. As such, there has never been a better time than now for collectors to get their hands on these coins.

As for the design of the obverse face, the central aspect is dominated by the raised bust of Lady Liberty, facing rightward. Lady Liberty’s bust is partially covered by a drape, and that is why the coin is referred to as the Draped Bust. Beneath the central image is a raised inscription which marks the 1807 year of minting. Above Lady Liberty, there is a raised inscription which reads “Liberty.” Around the outer edges of both the obverse and reverse sides of the coin are 100 individual, raised dots.

The collectability of the 1807 Draped Bust Large Cent is something that depends entirely on the condition it is in. Beyond that, collectors are concerned with regard to whether the coin is authentic or not. With so many counterfeits circulating nowadays, only those that have been graded are worthy of collection. Below is an outline of the different coin grades as well as what they mean for the appearance of the 1807 Draped Bust.

Uncirculated: A coin that is determined to be of Uncirculated grade is one that never spent any time on the open market. These pieces, from the moment they were minted, have been kept in safekeeping and have been kept free from damage. All in all, they are in pristine condition.

Extremely Fine: If an 1807 Draped Bust Large Cent is determined to be of Extremely Fine grade, this means that it was probably never circulated, but will still have some signs of damage. Whether it be a small chip or scratch, there will be some signs of wear.

Fine: A coin determined to be of Fine grade is one that was circulated for a period of time, but taken out of circulation before it could incur all that much damage. These pieces will show plenty of smoothing and light scratching as a result of having changed hands millions of times, but their condition will still be decent.

Good: Good is the worst grade a coin can receive and is indicative of a piece that has been extremely heavily circulated. These pieces will be so worn that much of the raised imagery and lettering will have been worn away over the years. Still, these coins are sought after by collectors.

In terms of assigning a price to the 1807 Draped Bust Large Cent, this is something that can be deciphered by looking at the condition of the coin. As the coin’s condition improves, the price will increase. Below is a chart aimed at giving you a better idea as to what you might be asked to pay for an 1807 Draped Bust given its grade.