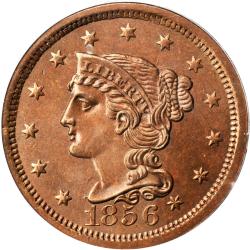 The 1856 Liberty Head Large Cent is one of those coins that collectors simply cannot get enough. These pieces are quite old, but are still able to be bought by just about anyone, anywhere. As time wears on, the total number of 1856 Liberty Heads is decreasing, meaning there has never been a better time than now for collectors to get their hands on one.

On the obverse side of the coin, the center is marked by the leftward-facing image of Lady Liberty. Resting upon the head of Lady Liberty is a band, and within that band there is an inscription which reads “Liberty.” Beneath the central imagery you will find yet another inscription, this one marking the 1856 year of minting. On the outer edges of the design there are 13 stars, representative of the 13 original colonies of the United States.

For collectors, the simple fact of the matter is that there is nowadays a need to protect yourself from counterfeits. Counterfeits are so frequently found that collectors will only settle for those pieces that have been graded as well as certified as being authentic. Below, you will find an outline of the different coin grades as well as what those grades mean for the appearance of the coin.

Uncirculated: A coin that is determined to be of Uncirculated grade is one that never spent any time exchanging hands on the open market. These pieces will have bene so well-preserved that they will appear today in the same condition they were in back in 1856.

Extremely Fine: If a Liberty Head is determined to be of Extremely Fine grade, this means that the coin is in near-perfect condition. There will be a few, minor flaws, however these flaws will be hardly noticeable and barely detract from the appearance of the coin.

Fine: Fine is the grade given to coins that have been heavily circulated and damaged to some extent. Though damaged, the smoothing and scratching you notice on the surface of these coins will be of no great significance.

Good: Good is the grade given to coins that have been both heavily circulated and damaged. These pieces will show plenty of signs of damage, ranging from deep scratching and chipping, to the complete wearing away of surface imagery.

In order to determine the price you might be asked to pay for an 1856 Liberty Head Large Cent, you must first look at the condition the coin is in. Naturally, the more well-preserved a piece is, the more expensive it is going to be. Beyond this, you must look at just how many of these coins are for sale at a given point in time. If there are an abundance of Liberty Heads for sale, the price, per coin, will be less expensive than if there are only a few for sale. Below, you will find a chart aimed at giving you a better idea of what you can expect to pay for a graded 1856 Liberty Head Large Cent.