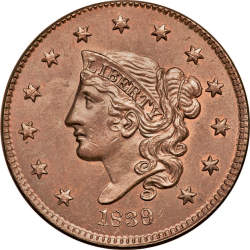 The 1839 Liberty Head Large Cent is attractive to collectors from all over the world, and are getting ever more popular all the time. With that much said, because the coins are so old there are only a limited number of them available to be purchased. Understanding this, there has never been a better time than now for you to get your hands on one.

On the obverse side of the coin, the center of the face is marked by the image of Lady Liberty, depicted in stunning detail. The leftward-facing woman has a band resting on her head, and within this band the word “Liberty” is inscribed. Beneath the central image you will notice an inscription indicating the 1839 year of minting. Finally, there are 13 stars on the obverse, each of them representative of the 13 original colonies of the United States.

On the coin’s reverse, the “One Cent” face value is inscribed in the very center. Surrounding the central face value is the image of an ornate wreath. Finally, the phrase “United States of America” is inscribed around both the wreath and the face value inscription. It must also be mentioned that the very outer edges of both the obverse and reverse are marked by raised rays.

The unfortunate reality of coin collecting is that some of the more high-profile pieces have been counterfeited quite frequently. As a means of protecting themselves against counterfeits, collectors will only purchase those coins that have been graded and certified as being authentic. Below, you will find an outline of the different coin grades as well as what those grades mean for the appearance of the Liberty Head.

Uncirculated: If an 1839 Liberty Head is determined to be of Uncirculated grade, this means that the piece was never on the open market and never exchanged hands. Instead, it spent almost all of its time in safekeeping, and that is why it looks absolutely pristine to this day.

Extremely Fine: Extremely Fine is the grade given to coins that might have been very briefly circulated, but might not have been circulated at all. Regardless of whether or not the coin was circulated, these pieces do feature some minor signs of damage. Despite this, their condition is great.

Fine: Fine is the grade given to coins that have been heavily circulated and somewhat damaged. You will notice some light scratching and smoothing thanks to years of changing hands, but all of the surface imagery and lettering will still be intact.

Good: Good is the grade reserved for the absolutely most worn Liberty Heads. These coins will show ample signs of damage, so much so that the raised imagery and lettering might have been worn away entirely.

In order to determine what the asking price for a graded 1839 Liberty Head might be, the first thing you will need to look at is the condition of the coin. Naturally, if the coin is extremely well-preserved, it is going to carry a higher asking price than a piece that has been heavily worn. In addition, you will need to take note of how many are up for sale. In many cases, the fewer coins there are up for sale, the higher the price will be for individual pieces. Below, you will find a chart aimed at giving you a better idea of what you might be asked to pay for a graded 1839 Liberty Head Large Cent.