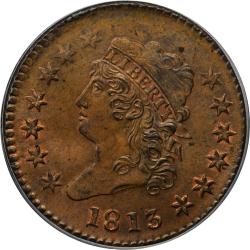 There were many coins produced in 1813, but of that lot very few are more popular than the Classic Head Large Cent. For one, this coin was only produced for a few years. Understanding the limited quantity of the Large Cent still around, now is the best time for you to get your hands on one. As time moves on, the total number of Large Cents still available for purchase will decrease.

On the obverse side of the coin, the central part of the coin is dominated by the raised image of Lady Liberty. Though older Large Cents saw Lady Liberty facing rightward, this coin sees her facing to the left. Inscribed on a band on Lady Liberty’s head is the word “Liberty.” To both the left and the right of the central image are groupings of stars which represent the original 13 colonies of the United States. Finally, the 1813 year of minting is inscribed towards the bottom of the coin.

Being that the 1813 Classic Head was produced so long ago and is so rare, it should come as no surprise that counterfeits exist. Collectors, always striving to avoid falling victim to counterfeited coins, are only going to buy the Large Cents that have been graded and certified as authentic. An outline of the different coin grades, as well as what those grades mean, exists below.

Uncirculated: If a Large Cent is determined to be Uncirculated, this means that it never spent any time on the open market exchanging hands. Because of this, these coins will be in absolutely pristine condition and will look today just as they did back in 1813.

Extremely Fine: Extremely Fine is a grade given to coins that were probably never circulated, but are not free from damage. Though the damage on these coins can best be described as insignificant, it is still taken into consideration during the grading process.

Fine: A coin determined to be of Fine grade is one that was circulated for an extended period of time, but removed from circulation before too much damage could occur. You will notice light, consistent scratching along with some smoothing, but all in all these coins will be in decent shape.

Good: The lowest grade a Large Cent can receive, Good is assigned to coins that have been heavily damaged and circulated. The damage on these coins will be so severe (in most cases) that some of the raised imagery and lettering on the surfaces of the Large Cent will have been partially worn away.

In terms of assigning a price to the 1813 Classic Head Large Cent, this is something that depends upon a few different items. First off, the scarcity of the coin will come into play. If there are only a limited number of coins available and a large number of people hoping to purchase them, it goes without saying that the price will be higher. Secondly, you must consider condition. The more well-preserved a coin is the more expensive it will be more often than not. The chart below is aimed at giving you a better idea as to what you might be asked to pay for an 1813 Classic Head Large Cent given its grade.