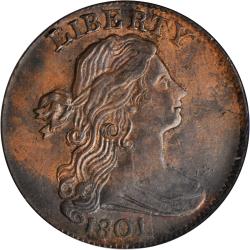 The 1801 Draped Bust Large Cent is a must-have for any serious collectors. Not only do these coins represent some of the earliest US coinage ever produced, the fact that they have managed to survive the years is a testament to the quality of US craftsmanship. With the total number of 1801 Large Cents decreasing all the time, there has never been a better time for you to get your hands on one.

On the coin’s obverse, you will notice that the rightward facing bust of Lady Liberty takes up a large portion of the center of the face. Towards the bottom of the bust you will notice a drape covering Lady Liberty; this is how the coin got its name. Above the central image will be an inscription which reads “Liberty,” while the 1801 year of minting will be on the bottom. Around the outer edges of both the obverse and reverse sides are 100 textured dots.

In terms of coins that are 200+ years old, collectors will not settle for pieces whose authenticity hasn’t been guaranteed. As such, you will find that the only 1801 Large Cents worth purchasing are the ones that have been officially graded by a professional grading service. Below is an outline of the different coin grades as well as what those grades mean for the appearance of an 1801 Draped Bust Large Cent.

Uncirculated: Though it is highly difficult to find an Uncirculated 1801 Large Cent, those that do exist will exist in near perfect condition. These pieces will be free from flaw and will look today just as they did when they were first minted.

Extremely Fine: A coin determined to be of Extremely Fine grade is one that was likely never circulated, but will still show some signs of damage. Whether this damage is a small scratch or some smoothing, it may hardly be noticeable but will be taken into account during the grading process.

Fine: Fine is the grade given to coins that have been circulated for a bit of time, but not for so long that the surfaces have been irreversibly damaged. Though you will definitely notice some scratching and smoothing thanks to years of circulation, these coins will be in mostly decent shape.

Good: A Good Large Cent is one that has been both heavily circulated and heavily damaged. These pieces will have a lot of scratching and smoothing, so much so that some of the raised aspects of the coin will have been worn away completely.

When it comes to determining the price of an 1801 Draped Bust Large Cent, this is something that determines almost entirely on the condition the coin is in. If the coin is well-preserved, it will fetch a much higher price than those that are in poor condition. Regardless, these coins are so old that even the most worn examples catch a high asking price. Below is a chart aimed at giving you a better idea as to what an 1801 Draped Bust Large Cent might cost given its condition.