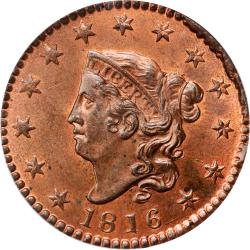 The 1816 Liberty Head Large Cent is an important coin in the eyes of so many collectors primarily due to the fact that it is the first edition of a new coin design. Though it closely resembles its predecessor, the coin’s design is a bit different from previous years. Today, the limited number of Large Cents still available makes now as good a time as ever to get your hands on one.

On the obverse side of the Liberty Head Large Cent, you will see the leftward facing image of Lady Liberty in the center. Though she resembles the image from the Classic Head coin, the depiction has been made a bit simpler. Inscribed in a band upon her head is the word “Liberty,” while the 1816 year of minting is listed towards the bottom of the coin. Finally, around the outer edge of the obverse there are 13 stars representing the 13 original colonies.

On the reverse side of the coin, the one cent face value is inscribed in the center. Surrounding this is a very detailed, regal wreath that is continuous and unbroken. Arching around most of the outer edges of the reverse is a phrase which reads “United States of America.”

For collectors, just any old Liberty Head Large Cent will not do. Because there are so many counterfeit coins out there, it is necessary now that collectors only purchase those coins that have been officially graded and certified as being authentic. Below is an outline of the different coin grades so that you have a better understanding.

Uncirculated: If a Large Cent is determined to be of Uncirculated grade, this means that the coin in question will have never made it out into the open market. From the moment it was minted up until today, it has been kept in and remains in perfect condition.

Extremely Fine: A coin determined to be of Extremely Fine grade was probably never circulated, however it will show some signs of damage. To be fair, the damage you will find is minor in nature. These coins are still in excellent condition.

Fine: Fine is the grade given to coins that have been circulated and, as a result of that circulation, damaged a bit. Most often, the damage you will find will come in the form of light scratching on the surfaces and some smoothing due to the changing of hands over the years.

Good: Good is the grade given to coins that have been extremely heavily circulated and damaged. These pieces will very much show their age, and the damage present will be so severe that some of the raised surfaces will have been completely smoothed down.

In order to determine the price of an 1816 Liberty Head, you must consider both the rarity and condition. Naturally, the fewer of these coins that there are for sale, the higher the price will be, regardless of condition. Secondly, as the condition of a coin improves, the price will increase. Below is a chart aimed at giving you a better idea as to what you might be asked to pay for an 1816 Large Cent given its grade.