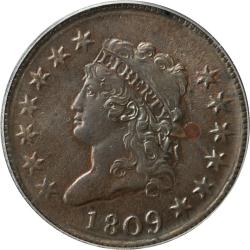 The 1809 Classic Head Large Cent is an interesting coin for a variety of reasons. Not only is the coin extremely old and rare, it features a design that has not been around for more than 100 years. Being that there are only a limited number of coins around, now is as good a time as ever to get your hands on one.

Collectors have strict requirements for their Large Cents. Because the coins are so old, they will only settle for pieces that have been officially graded and certified as being authentic. There are so many counterfeits nowadays that only certified coins are desired by collectors. The different grades a Classic Head Large Cent can receive will be listed and elaborated upon below.

Uncirculated: An 1809 Classic Head that is graded as being Uncirculated is one that spent absolutely no time at all on the open market. Because, from the time they were minted, these coins were kept in a safe place, they will show absolutely no signs of wear and tear.

Extremely Fine: a Classic Head determined to be of Extremely Fine grade is one that may not have been circulated, but will show some signs of damage. The damage will more than likely be small and hardly noticeable, but it is still there and accounted for during the grading process.

Fine: Fine is the grade given to coins that have been circulated, but not for such a long time that they have been too heavily damaged. You will notice some smoothing of the raised features as well as some scratching, however all of the raised aspects of the coin will still be discernable.

Good: Good is the lowest grade an 1809 Classic Head can receive. These coins were heavily circulated and will show plenty of signs of damage. All things considered, these pieces are still highly sought after by collectors.

In order to determine the value of an 1809 Classic Head, you really do not need to look much further than its grade. These coins are all very old and are expected to be in poor condition. As this condition improves, the price will increase dramatically. Below exists a chart aimed at giving you a better idea as to what you might be asked to pay for one of these coins given its grade.