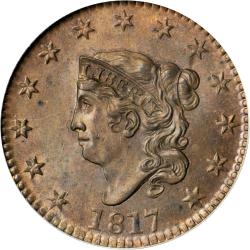 The 1817 Liberty Head Large Cent is one of the first editions of a newly-designed coin series. As a result of it being one of the first, it is also one of the most sought after in the eyes of collectors. Being that the coin was produced so long ago, it should come as no surprise that there are only a limited number left in existence, making now as good a time as ever to get your hands on one.

On the obverse of the Liberty Head Large Cent, you will see in the center the image of Lady Liberty. Lady Liberty is depicted facing leftwards, which is in stark contrast to the direction she was facing on many previous versions of the Large Cent. Inscribed upon a band on her head is the word “Liberty,” while the 1817 year of minting is situated towards the bottom of the coin. Around the outer edge of the obverse are 13 stars, representing the 13 original colonies of the United States.

The coin’s reverse is a bit simpler, and features in the center the inscription of the coin’s face value, one cent. Around that inscription is a depiction of an ornate wreath. Finally, the words “United States of America partially surround the two aforementioned features.

When it comes to collectors, not just any Large Cent is going to do. Because this coin is so frequently counterfeited, collectors want to be assured that the one they own is, in fact, authentic. As such, they have their coins graded. Below is an outline of the different coin grades as well as what those grades mean for the appearance of the 1817 Liberty Head Large Cent.

Uncirculated: A coin determined to be of Uncirculated grade is one that never spent any time on the open market. As a result of the coin being kept in safekeeping for 2 centuries, it looks today just as it did back in 1817. It will be in pristine condition.

Extremely Fine: A Large Cent that is determined to be of Extremely Fine grade is one that was likely never circulated, but will feature some sort of damage. Though the damage will not be much, it will be enough to downgrade the coin from Uncirculated.

Fine: Fine is the grade given to coins that spent a good bit of time in circulation. Thanks to years of exchanging hands, these pieces will show signs of scratching and chipping. All things considered, these Large Cents will still be fairly well-preserved.

Good: Good is the grade given to coins that have definitely seen their better days. These coins will have been circulated more than any other, and damaged heavily. From heavy scratching to any number of other imperfections, Good 1817 Liberty Head Large Cents are in rough shape.

Determining a price for the 1817 Liberty Head Large Cent will depend on both the scarcity of the coin and its condition. Almost every 1817 Large Cent you will find can be described as scarce, so there is value in all of them. Understanding this, as the value of the coin improves, the asking price will increase. Below exists a chart aimed at giving you a better idea as to what you can expect to pay for an 1817 Large Cent given its grade.