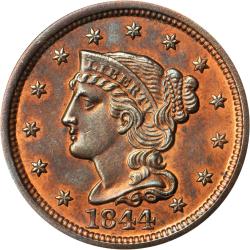 For coin collectors, there are few pieces that are more attractive than the 1844 Liberty Head Large Cent. Having been produced a very long time ago, it goes without saying that the number of 1844 Liberty Heads is always going to be decreasing. Because of this, there has never been a better time than now to get your hands on one.

On the obverse side of the Liberty Head, the center of the coin features the leftward-facing image of Lady Liberty. Resting upon Lady Liberty’s head is a band, and within that band the word “Liberty” is inscribed. Beneath the central image, there is an inscription marking the 1844 year of minting. Around the outside of the central imagery are 13 stars, each representing one of the 13 original colonies of the United States.

For collectors, the simple fact of the matter is that the number of counterfeited Large Cents is growing all the time. As a way of protecting themselves from counterfeits, collectors ensure that the 1844 Liberty Heads they purchase are graded and determined to be authentic. Below, we will outline the different coin grades as well as what they mean for the appearance of the Liberty Head.

Uncirculated: A coin that is determined to be of Uncirculated grade is one that never made it out onto the open market for circulation. These coins will be in absolutely perfect condition, and will look today exactly like they did back in 1844 when they were first minted.

Fine: A coin determined to be of Fine grade is one that was definitely circulated, however not for an entirely lengthy period of time. These pieces will show some light scratching and chipping, but apart from that will be in pretty decent condition.

Good: Good is the worst grade a coin can receive, and is one that means the coin in question was circulated heavily. As a result of this heavy circulation, these coins have also been on the receiving end of a lot of damage.

The biggest question a prospective collector of the 1844 Liberty Head will have is with regard to how much it will cost to purchase one. Naturally, it goes without saying that the more well-preserved a coin is, the more expensive it is going to be. In addition to this, the number of coins that are up for sale also comes into play. If there are only a few coins for sale, the price you will pay per coin will be larger than it would be if there were a plentiful quantity up for sale. Below, you will find a chart aimed at giving you a better idea of what you might be asked to pay for an 1844 Liberty Head Large Cent, given the coin’s grade.