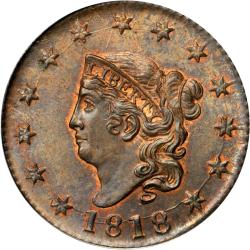 The US Mint produced many coins in 1818, but you will be hard-pressed to find even one that is more popular amongst collectors than the Large Cent from that year. Known as the 1818 Liberty Head Large Cent, the coin is a beautiful as it is rare. The number of these coins available for sale is shrinking all the time, so you had better get your hands on one in a hurry.

On the obverse side of the Liberty Head Large Cent, Lady Liberty is depicted facing leftward. Sitting upon her head is a metal band of sorts, within which you will notice an inscription of the word “Liberty.” On the bottom of the reverse, there is an inscription marking the 1818 year of minting. Finally, lining the outer edge of the obverse are 13 stars; representative of the 13 original colonies of the United States.

The design of the reverse side of the 181 Liberty Head Large Cent is a bit more simplistic. In the center there is a “One Cent” inscription which marks the coin’s face value. Surrounding this is a highly detailed wreath that is circular. Finally, around the outside of all of this is an inscription which reads “United States of America.”

For collectors, the fact that the Large Cent is frequently counterfeited means that certain precautions must be taken prior to purchase. For one, the only coins purchased nowadays are graded. This authentic certification usually assuages the mind of even the most stringent collector. Below exists an outline of the different coin grades.

Uncirculated: A Large Cent that is determined to be of Uncirculated grade is one that never made it out onto the open market. These coins were kept in a safe place throughout the entirety of their existence, and because of this will appear today in pristine condition.

Extremely Fine: An Extremely Fine Large Cent is one that might show some signs of damage, but was either circulated for a short period of time, or not at all. Even despite these small imperfections, the coin itself will still be in great shape.

Fine: Fine is the grade given to coins that have been circulated for an extensive period of time, but are not so heavily damaged. These coins will feature consistent scratching, but all of the raised imagery and lettering should still be perfectly intact.

Good: A coin determined to be of Good grade is one that was circulated for an extended period of time. These pieces will show heavy signs of wear and tear. On occasion, the wear will be so severe that some of the raised aspects of the coin’s designs will have been compromised.

Now that you know everything there is to know about the 1818 Large Cent, you might want to know more about its pricing; this is simple. First of all, the price of the coin is determined by the scarcity. The fewer there are, the more expensive they are going to be individually. Beyond that, the price of the 1818 Large Cent is determined by its condition. The more well-preserved pieces will sell for higher prices than those that have not been so well-preserved. Below is a chart aimed at giving you a better idea of what you might be asked to pay for an 1818 Liberty Head Large Cent given its grade.