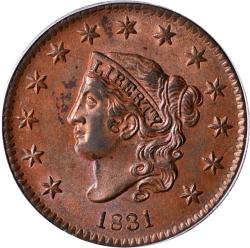 The 1831 Liberty Head Large Cent may be a coin from the United States, but it appeals to collectors from the world over. Thanks to the beauty of its design, overall scarcity, and historical significance, collectors of all types will do almost anything to get their hands on these coins. Being that the number available for purchase is decreasing steadily, it would behoove you to get your hands on an 1831 Liberty Head sooner rather than later.

The reverse side of the Liberty Head Large Cent features a “One Cent” face value inscription in the very center. Surrounding the central inscription is the image of a wreath, depicted with incredible detail. Around the outside of both of these items is another inscription, this one reading “United States of America.” Before going any further, it must be mentioned that on both the obverse and reverse sides of the coin, the very outer edges are complete with raised rays which give the coin a bit of added texture.

In the eyes of collectors, the 1831 Large Cent is one that is attractive, but also a coin that must be approached with caution. The reason for this is due to the fact that the coin is counterfeited far more frequently than you might think. As such, collectors will only settle for Liberty Heads that have been graded and certified as being authentic. An outline of the different coin grades exists below for your reference.

Uncirculated: If a coin is determined to be of Uncirculated grade, this means that the piece was likely never used on the open market. Having never exchanged hands, these pieces will be free from most every type of damage. All in all, Uncirculated Liberty Heads will look today exactly like they did back in 1831 when they were first minted.

Extremely Fine: Extremely Fine 1831 Liberty Heads might not have ever been circulated, but they are not completely free of damage. On the surfaces of these coins you will notice a few imperfections, ranging from small scratches to a chip or two. Still, these coins are in very good shape.

Fine: Fine is the grade given to coins that were circulated for a while and show signs of that time in circulation. These coins will feature a good bit of damage, from smoothing, to scratching, and just about everything in between.

Good: Good is the worst grade a Liberty Head can receive, as it means that the coin was very heavily circulated and damaged. In fact, the damage on the surfaces of these coins is so significant that some of the raised imagery and lettering might have been worn away.

When it comes to assigning a price to the 1831 Large Cent, you have to look at both how many are for sale as well as the condition of those coins. Naturally, if there are only a handful for sale, you will find that the price for an 1831 Liberty Head Large Cent might be a bit more than editions with a larger quantity up for sale. Beyond this, as the condition of the coin improves the price is almost always going to increase. Below, you will find a chart aimed at giving you a better idea as to what you might be asked to pay for a Liberty Head given its grade.