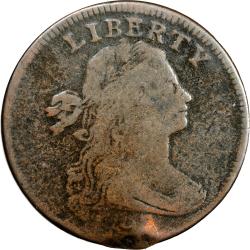 The 1797 Draped Bust Large Cent is an iconic piece of US coinage that is now well over 200 years old. The sheer age of the coin makes it attractive to collectors and investors alike, however the coin is a piece of US history, and this draws in a whole different type of collector. Regardless of why people seek these coins out, it is important to know that these pieces are extremely popular and that now is as good a time as ever to get your hands on one.

On the obverse side of the coin, the central part of the face is dominated by the raised image of a Lady Liberty bust. Per the coin’s name, there is a drape partially covering the lower portion of the bust. Above the central imagery is a raised inscription which reads “Liberty,” while the 1797 year of minting can be found towards the bottom. On both the obverse and reverse sides of the coin, the outer edges are marked by 100 individual, raised dots which give the coin more texture.

When it comes to the 1797 Draped Bust Large Cent, collectors simply do not have time for coins that are not guaranteed to be authentic. That is why the only versions of these coins people will consider purchasing are those that have been professionally graded. Below you will find an outline of the different coin grades as well as what they mean for the appearance of the 1797 Draped Bust Large Cent.

Uncirculated: Though there are very few Uncirculated 1797 Draped Bust Large Cents around, those that are around will be in pristine condition. The Uncirculated grade simply means that the coin in question was never exchanged on the open market and, thus, has accrued no signs of wear and tear.

Extremely Fine: A coin determined to be of Extremely Fine grade is one that has never been circulated, but will play host to some sort of damage. Whether it is a small scratch or nick, there will be at least some small signs of damage.

Fine: A coin determined to be of Fine grade is one that was circulated for a period of time, but taken out of circulation before it could incur too much damage. You will notice light, consistent scratching on the surface that has occurred from years of exchanging hands. All in all, these pieces will still be in pretty good shape.

Good: Good is the worst grade a 1797 Draped Bust Large Cent can receive, and is indicative of a coin that was not only heavily circulated, but also heavily damaged. In many cases, the damage on these coins is so severe that some of the raised imagery and lettering might have been entirely worn away.

For coins as old as the 1797 Draped Bust Large Cent, the biggest concern on the part of collectors is the condition it is in. All of these pieces are valuable, but their value increases dramatically as its condition improves. Below is a chart aimed at giving you a better idea as to what you might pay for a 1797 Large Cent given its grade.