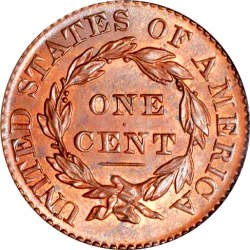 The 1829 Liberty Head Large Cent is one of many Large Cents produced by the US Mint throughout the years, but is also one that is of particular interest to collectors the world over. Being that the coin was produced so long ago, it really shouldn’t come as much of a surprise that there are only very few left on the market. As such, it follows that now is as good a time as ever to purchase one.

On the obverse side of the Liberty Head Large Cent, you will notice that the leftward facing image of Lady Liberty dominates the center. Inscribed upon a band resting on Lady Liberty’s head is the word “Liberty.” Beneath the central image is another inscription, this one marking the 1829 year of minting. Surrounding the central image of Lady Liberty are 13 individual stars, each one representative of one of the original 13 colonies of the United States.

On the coin’s reverse, the center of the face is marked by an inscription which reads “One Cent,” the coin’s face value. Encircling the face value inscription is the image of an ornate wreath. Surrounding all of this is one more inscription, this one reading “United States of America.” On the outer edges of both the reverse and obverse sides of the coin are raised rays, which give the coin a bit of added texture.

For collectors, the 1829 Large Cent, like many other Large Cents, are counterfeited quite frequently. Because of this, collectors are wary about the pieces they decide to purchase. As an extension of this, the only Liberty Head Large Cents that will appeal to collectors are those that have been graded and certified as being authentic. Below, we will go over the different coin grades, as well as what these grades mean for the appearance of an 1829 Large Cent.

Uncirculated: If an 1829 Liberty Head Large Cent is graded as being Uncirculated, this means, quite literally, that the coin never spent any time on the open market. Instead of exchanging hands, these coins were kept in safekeeping for nearly a century. As a result, these pieces will appear to be in pristine condition.

Extremely Fine: Extremely Fine is the grade given to Large Cents that are only very lightly damaged. Many of these coins were not circulated at all, and will only feature the slightest signs of damage. Apart from a small scratch or two, these coins will be in excellent condition.

Fine: A coin that is determined to be of Fine grade is one that definitely spent time in circulation, but was taken out before too much damage could have occurred. Though you will definitely notice signs of wear such as consistent scratching, the coins will still be in good shape.

Good: Good is the lowest grade an 1829 Liberty Head Large Cent can receive, and is indicative of a piece that was heavily circulated and damaged. The exact type of damage will vary, but usually comes in the form of significant smoothing and/or scratching.

In terms of the price you will be asked to pay for a graded 1829 Liberty Head Large Cent, this is something that will depend on both the condition of the coin as well as how many are for sale. For one, the coin’s condition means everything. If a coin is well-preserved, it will almost always carry a higher asking price than coins that have been heavily damaged. What’s more, the more coins from a specific year that are for sale, the less expensive individual coins are likely to be. Below, you will find a chart aimed at giving you a better idea of what you can expect to pay for an 1829 Liberty Head given its grade.