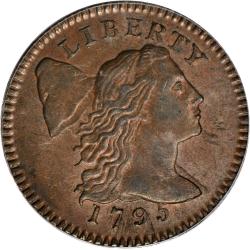 Coins from before 1800 are incredibly popular, and when it comes to US coins minted before 1800 this is perhaps even truer. These coins serve not only as a part of the historical origins of the United States, they are also a great addition to any collection large or small. The 1795 Liberty Cap Large Cent is one of the most sought after coins in the eyes of investors, and the reasons for this are many. For one, its design is the foundation upon which so many other coin designs have been based.

On the obverse side of the 1795 Large Cent, the central part of the coin is dominated by the imager of Lady Liberty facing rightward. During the Large Cent’s first year of production, in 1793, Lady Liberty’s hair was flowing freely, but on this coin her hair is partially covered by a cap. Above the central image is an inscription which reads “Liberty,” while the 1795 year of minting sits below the image. Around the outer edge of both the obverse and reverse sides there are 100 individual dots.

When it comes to collectors and the 1795 Liberty Cap Large Cent, there are very few instances where non-graded coins will be purchased. Because these old coins are so frequently counterfeited, collectors only want those that have been certified as being authentic by a professional grading service. Below, we have outlined the different coin grades as well as what those grades mean for the appearance of the 1795 Large Cent.

Uncirculated: If a 1795 Large Cent is graded as being Uncirculated, and very few of them are, this means that the coin never made it into the open market. Having been kept in a safe place throughout the entirety of their existence, these coins will appear today just as they did back in 1795—save for a few coloration issues.

Extremely Fine: If a 1795 Large Cent is determined to be of Extremely Fine grade—and, once again, very few of these coins exist—this means that the piece was probably never circulated, but still shows some signs of damage. Though the damage will be light, it is still there and taken into consideration by graders.

Fine: Fine is the grade given to coins that have been heavily circulated and lightly damaged. You will notice consistent scratching on both surfaces as well as a few chips. In all, the coin will be smoothed to some extent, but not so much that the imagery and lettering will have been compromised.

Good: Good is the worst grade a 1795 Large Cent can receive, and is also the grade you will find most often. Being that these coins are so old, and most of them have been quite heavily damaged, it is no surprise that they are of Good grade. Despite this, these pieces are still highly sought after.

When it comes to determining the value of one of these coins, look no further than the condition. While even heavily damaged 1795 Large Cents are valuable, that value increases as the condition improves. Below you will find a chart that will help you gain a better understanding of what you might be charged for a 1795 Large Cent given its grade.