2021 Great Britain Gold Sovereign (BU)
As Low As:
In Stock

2020 Great Britain Gold Double Sovereign
As Low As:
In Stock 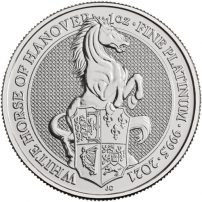 Gold and Silver Bullion from the Royal Mint of England

One of the most respected minting facilities in the world is the Royal Mint of England. Originating as the London Mint in the 9th century, the Royal Mint has produced coinage for countless British monarchs, the United Kingdom, and various Commonwealth nations throughout its more than 1,000 years in operation. Today, the Royal Mint is home to some of the most spectacular gold and silver bullion coin programs you can buy. Learn all about the various options from this sovereign mint in the paragraphs below!

The Britannia Coin Series from the Royal Mint is the official bullion coin of Great Britain. Akin to the American Eagle or Canadian Maple Leaf Series, the Britannia collection features designs reflective of the nation with the same iconic symbols used on the obverse and reverse sides with each passing year.

Britannia coins from the Royal Mint debuted in 1987 with the British Gold Britannia. This coin was first offered with four weights to choose from which included 1 oz, 1/2 oz, 1/4 oz, and 1/10 oz. The Gold Britannia featured 22-karat gold content, otherwise known as crown gold, until 2012. In 2013, two changes were made to the Gold Britannia collection. First, and most importantly, the coins now featured .9999 pure gold content. Secondly, new weights were added which included 5 oz and 1/20 oz options.

The design of the Britannia series is the same for both the silver and gold coins for sale. Philip Nathan won a coin design contest hosted by the Royal Mint in 1987 to craft an inspirational design for the new Britannia coins before the launch of the gold coins that same year. Nathan’s vision of Britannia, a symbol dating back 2,000 years through British history, was ideal for the modern world and depicted the strength and honor of Great Britain.

On the obverse of Britannia coins is an effigy of Queen Elizabeth II. The only monarch to rule over Britain during the history of the Britannia, Queen Elizabeth II has been captured on the obverse in right-profile portrait in three different designs. The latest of these is the fifth-generation design from Jody Clark which depicts Her Majesty at age 89.

The reverse side of all British Britannia Coins includes the powerful symbol of Britannia. She stands on the nation’s coastline looking out toward the sea watching for invaders. She wields a trident to control the seas in her right hand, while holding a shield with the Union Jack emblazoned upon it to defend the nation.

Following the popular reception for the Perth Mint’s Lunar Series I (1996-2007) and Lunar Series II (2008-2019) collection, the Royal Mint of England opted to throw its hat in the ring for investors and collectors as well. The Shengxiao Series debuted from the mint in 2014 with its own, unique designs on the reverse side. Each year’s release features the animal found on the Chinese Lunar Calendar in a given year. The collection debuted in 2014 with the Year of the Horse and has followed up each successive year with designs including:

The series will continue to follow the animals from the Zodiac with each passing year. The Royal Mint’s collection includes artwork from Wuon-Gean Ho, a British-Chinese citizen with extensive experience in woodworking, painting, and other forms of artistic design. Her works of art feature on both the gold and silver options in the Shengxiao Collection, which include only 1 Troy oz coins in each metal.

The most recent introduction from the Royal Mint is also, arguably, its most diverse. The Queen’s Beast Series of coins debuted in 2016 with a Lion of England design. The theme of the collection focuses on 10 of the most important heraldic beasts in the long history of Britain’s monarchy. Designs such as the Lion of England date back to the 11th century AD and represent the reign of some of the kingdom’s earliest monarchs.

The Royal Mint calls this the Queen’s Beast Collection because each of the 10 designs reflects a heraldic beast which was carved as a statue and set near the doors to Westminster Abbey when a young Queen Elizabeth II arrived there in early 1953 for her official coronation as the Queen of England. Today, each of those 10 beasts is included on bullion and proof coins from the Royal Mint. The designs in the Queen’s Beast Series include, in no particular order:

– The Lion of England

– The Unicorn of Scotland

– The Red Dragon of Wales

– The Black Bull of Clarence

– The Griffin of Edward III

– The Falcon of the Plantagenets

– The Yale of Beaufort

– The White Lion of Mortimer

– The White Greyhound of Richmond

– The White Horse of Hanover

In the original release of the Lion of England, the Royal Mint offered the design in a first-ever 2 oz silver bullion coin with .9999 pure silver content, along with a 1 oz gold and 1/4 oz gold coin with .9999 pure gold content. The bullion series expanded in 2017 to feature a 10 oz silver coin and a new 1 oz platinum coin for each design as well, with the Royal Mint reissuing the Lion of England and other previously issued designs in the new options.

Each of the Queen’s Beast gold and silver coins is also available in proof versions as well. The Proof Queen’s Beast Coins have set mintage figures, ship in commemorative display boxes from the Royal Mint, and include varying weights such as 1 oz, 4 oz, 10 oz, and 1 Kilogram for the silver proof coins.

History of the Royal Mint of England

The earliest coins struck in Great Britain appeared around 60 BC when Celtic tribes began hammering coins with the likeness of local leaders. The Royal Mint as it exists today traces its roots to the reign of Alfred the Great. When he recaptured London in 886, he established a London Mint near sites of former Roman mints in the city from 800 years earlier. From 886 to 1279, the London Mint was the primary minting location of British coins, though other mints throughout the kingdom also issued coinage.

We encourage our JM Bullion customers to reach out to us with questions about our collection of gold and silver from the Royal Mint. Feel free to call us with your inquiries at 800-276-6508, chat with us live online, or simply send us an email with your questions.