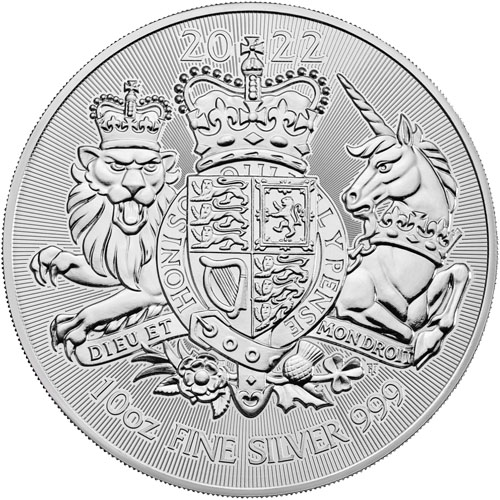 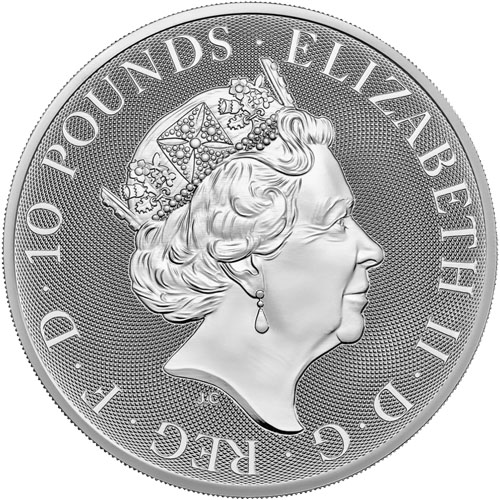 Any quantity available for $5.99 per oz over spot!
Add to WishlistLog In to add this product to your Wishlist
Free Shipping on $199+ Orders

The Royal Mint has an established reputation for issuing bullion coins that are rich in British history, whether it is the series itself, the design elements, or the symbols reimagined in each new release. The Royal Arms Series is a young program, having debuted in 2019, but its inspiration is more than 800 years in the making. Right now, 2022 10 oz British Silver Royal Arms Coins are available to purchase online at JM Bullion.

When one of the most powerful houses to rule the throne of England, the House of Plantagenets, rose to control the crown in the 12th century, it was not long before England would have an official Royal Arms. Previously, various images of lions had been used by both early Anglo-Saxon monarchs and Danes conquering certain regions of England.

In 1198, King Richard I gave the Kingdom of England its first official Royal Arms. The three lions he bore on his shields and banners during the Third Crusades would become the official coat of arms of the kingdom. The design depicted three golden lions on a field of red with each one in passant guardant position.

Queen Elizabeth II is on the obverse side of 2022 British Silver Royal Arms Coins. Her Majesty appears here in right-profile relief wearing the George IV State Diadem Crown. This design was created in 2015 by Jody Clark for the Royal Mint to use as the fifth-generation image of the Queen on British coins.

For the reverse design of 2022 10 oz Silver Royal Arms Coins, the mint features an image of the modern Royal Arms of England from Timothy Noad. The image featured here includes a quartered shield with the coat of arms of England, Scotland, and Northern Ireland, with the Lion of England and the Unicorn of Scotland supporting the shield. Above, the Imperial Crown is featured above the design.

These 2022 10 oz British Silver Royal Arms Coins are available to you with individual protective plastic capsules. These coins come in Brilliant Uncirculated condition.

JM Bullion customer service is here to answer any questions when you buy silver online. Please call us at 800-276-6508, chat with us live online, or email us directly.