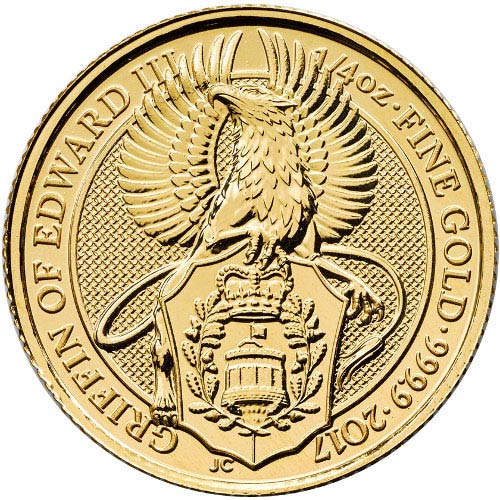 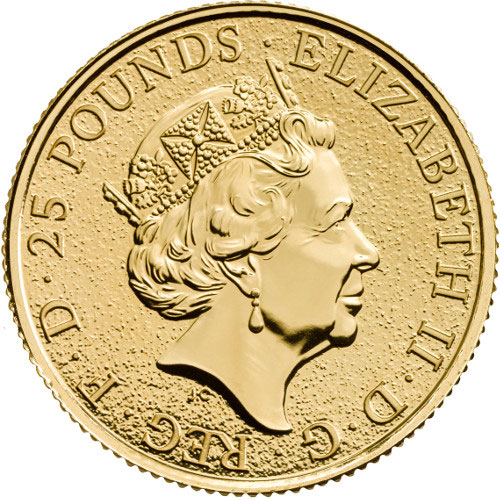 The British Queen’s Beast collection of silver and gold coins from the Royal Mint is a brand-new offering from the United Kingdom’s sovereign mint, and it offers a stunning glimpse into the heraldry and images of the British Crown. The planned 10-coin release celebrates the coronation of Queen Elizabeth II in 1953, as well as the monarchy’s history. The 2017 ¼ oz British Gold Queen’s Beast Griffin Coin is available to purchase now from JM Bullion.

Jody Clark made a splash with his 2015 portrait of Queen Elizabeth II for British currency. The Queen’s effigy always appears on the obverse of British coinage, but it hadn’t been updated to reflect her age since 1998’s design from Ian Rank-Broadley. At just 33 years old, Clark is the youngest Royal Mint engraver to design the Queen’s effigy.

Clark not only created the latest effigy of Her Majesty, he is also the designer behind all 10 releases in the Queen’s Beast collection. Each of the 10 designs represents one of the heraldic creatures captured in statue form at the 1953 coronation of Queen Elizabeth II. Clark’s designs are all based upon the original sculptures from James Woodford RA.

Each 2017 ¼ oz British Gold Queen’s Beast Griffin Coin in this listing is in BU condition. Coins in this condition have no signs of wear and tear, however you will notice minor flaws such as breaks in the luster, spotted surfaces, or contact marks as a result of the production process at the mint.

The obverse of the British Gold Queen’s Beast Griffin Coin includes the right-profile portrait of Her Majesty Queen Elizabeth II. Clark’s design replaces the 1998 fourth-generation depiction of the Queen, who is the longest-reigning monarch in British history, and now the longest reigning in the world.

On the reverse of the 2017 ¼ oz British Gold Queen’s Beast Griffin Coin is the mythical Griffin. Part lion and part eagle, the griffin was said to be the most powerful animal in the world, possessing the traits of the King of Beasts and the King of Birds in one figure. The griffin was closely associated with King Edward III, who ruled Britain for over 50 years.

We encourage JM Bullion shoppers to contact us with questions. You can reach our customer service team at 800-276-6508, connect with us online through our live chat, and email us directly.

Rosanne from IL - May 18, 2018
"JMBullion delivered beautiful coin. I love this 1/4 oz QB series (can't afford 1 oz so very grateful for the fractional that allows me to collect a beautiful series). Reasonably priced, delivered on time. Good job JMB!"